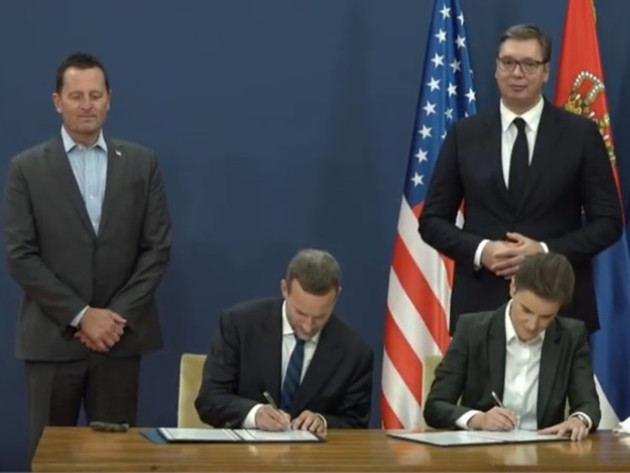 Brnabic and Boehler opened the DFC online office, by unveiling a monitor on which a recording of the premises of that office in Belgrade was released, through which US Ambassador to Serbia Anthony Godfrey walked, the Government of Serbia announced.

The statement was signed in the Palace of Serbia, in the presence of President of the Republic of Serbia Aleksandar Vucic and US President Donald Trump's advisor Richard Grenell.

As he emphasized, Trump had enough understanding and patience and wanted to show respect for the Serbian people and citizens of Serbia.

– The talks in Washington were not easy in everything, but we were respected, and we will fulfill our obligations from the agreement – Vucic said.

The President mentioned that the arrival of DFC in Belgrade, with symbolic significance, i.e., a signal to investors to come and do business here, also means the projects, emphasizing that it is of great importance for our citizens, but also for further economic growth of our country.

Grenell said that the United States is serious in its intention to fulfill the promises to Belgrade and Pristina and to turn them into new jobs.

– We want to fulfill the promises we gave to the officials of Serbia earlier, we do not only want to deal with words, but to focus on economic development for the benefit of the people – he emphasized.

According to him, the symbolism is important, but it does not provide food on the table, and that is why the United States will do its best to fulfill its promises and create jobs in Serbia.

The special envoy of the President of the United States pointed out that it would take a year for the citizens of Serbia and the so-called Kosovo to feel an improvement, after the signed economic agreement, while the political part of the dialogue should wait until the economy shows progress.

He said that economic normalization takes time to show results, but that if the parties return to political debates, the same thing that others have been doing for 21 years would have been done, and that is to just put words on paper until citizens feel results.

Boehler assessed that the agreement, which was signed in Washington, is not only historical, but also a reflection of the fact that this country and the region will not be trapped in the past, but will move towards the future.

He stated that representatives of six American government agencies arrived in Belgrade, which is a sign of strong relations between Serbia and the United States, and announced that the DFC office in the Serbian capital will be permanent.

Director of the DFC office in Belgrade John Jovanovic said that this is the greatest part and responsibility for him and that his task is the economic development of the region and for the Balkans to become a symbol of peace and prosperity and a place for young people to return and get jobs.