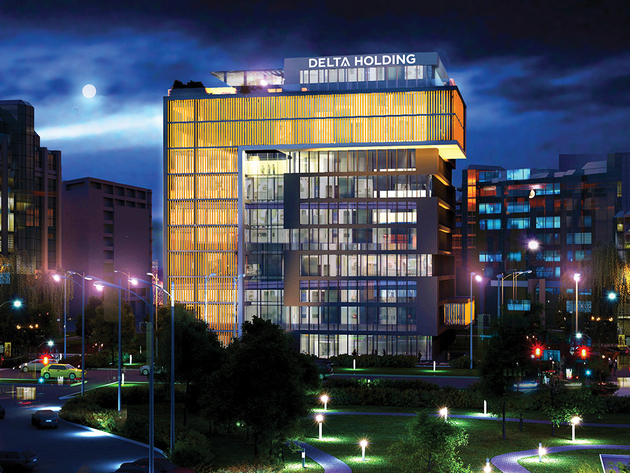 (Photo: Delta Holding)
In 2020, Delta Real Estate continued bringing innovations that enrich the cities we live and work in, offering the kind of conditions and services that were not available previously. The current year is marked by the works on the construction of a new business building, Delta House.
The company is very proud of this project, as the building will be much more than office space. Employees now need much more than a desk and a chair and the new office building will provide them with various additional features, such as restaurants, cafes and a gym.

The building will have a total area of 23,000, and two of the total of 11 floors will be a common area, four will be taken up by the seat of Delta Holding, whereas five are meant to be leased. A total of 188 parking spaces have been designed as well.

The investment is worth EUR 40 million, and the plan is for 800 additional workers to be employed at the new premises.

The building will be LEED-certified, which entails the certification of facilities planned and built in line with the principles of green building. It is also designed as an energy efficient building which will use solar panels and collect and use rainwater to irrigate the greenery collect rainwater, and the green area on the parcel will be larger than the developed part of the parcel. As announced, this will be an A-class facility and a high-category office space.
Recycled plastic balls in the service of construction

Protection of the environment is also carried out during the construction of Delta House by using plastic balls that replace heavy concrete in all those places where concrete is not necessary for static reasons. In addition to the fact that the amount of concrete used, and thus the weight of the structure, is smaller, this system also enables the use of significantly thinner slabs in the construction of buildings. 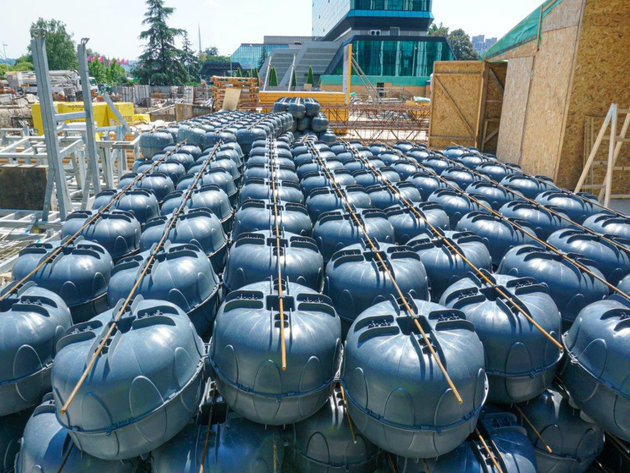 (Photo: Velibor Gajović)
This seemingly unusual technology involves placing balls between the upper and lower zones of the armature, namely in the slab zone that does not bear the structure, after which the concrete is poured in while being exposed to vibration in order for the concrete mixture to be evenly distributed and form the future ribs. Once the concrete hardens, this kind of construction has properties like any other.

The use of this technology also has two environmental benefits. Namely, the balls are made of 100% recycled plastic, and as less concrete is used in construction, less CO2 is emitted into the atmosphere.

The use of recycled plastic balls in the construction of Delta House saved 1,600 cubic metres of concrete and reduced the weight of the structure by 4,000 tonnes.

The use of hollow slabs also reduced the number of pillars and provided larger spans of up to 10.8 metres, without additional beams. By placing 100,000 balls in the structure of a new office building, the CO2 emissions will be reduced by 336 tonnes.