Al Dahra to Invest EUR 173 Million in Most Modern Agricultural Complex in This Part of Europe – By the End of 2022, Palilula to Feature Animal Feed Factory, Silos, Biogas Power Plants, New Irrigation Systems... 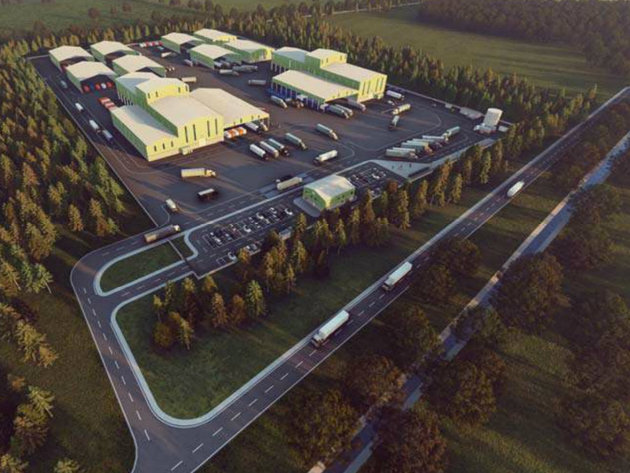 Exterior of future animal feed plant in Kovilovo (Photo: Bauprojekt/Urbanistički projekat, screenshot)
Al Dahra Srbija intends to invest EUR 173 million in construction of agricultural-industrial complexes in the territories of the Belgrade municipalities of Palilula and Surcin by the end of 2022.

This is said in the documentation of the Urban Project of the construction of a factory complex for the processing of animal feed, which, as eKapija recently reported, is to be built in Kovilovo, in the area of the former PKB complex.

The decision of the Government of Serbia adopted in late July 2020, which is part of the project documentation, says that, based on the company's three-year investment program from 2019 to 2022, the investment is to be carried out in phases, in two stages, with the aim of Al Dahra meeting its investment obligation toward the Republic of Serbia in the total amount of EUR 30 million.

In its decision, considering the amount of the planned investments and the creation of new jobs for highly qualified young employees, the government pronounced Al Dahra's investment an investment of special importance for Serbia.

In the first stage, it entails the construction of four agricultural-industrial complexes, construction of an animal feed processing plant, two complexes of new farms for a total of 7,500 dairy cows with stalls and silos and 15 independent biogas facilities, as well as the construction of an agricultural mechanization center complex. The biogas facilities will consist of a facility for the production of biogas and a facility for the production of electricity from biogas, which will deliver electrical energy to the public network.

The construction works on the first stage of the investment, as said in the project, will start this August and end in October 2021.

The decision says that Al Dahra Srbija currently has 6,399 cows, that the total number of heads of livestock is 17,298 and that, this year, it has already contracted the procurement of 612 highly parous heifers and that a half of those imports have already been realized.

It is also said that, in Pancevacki Rit, the company has 16,700 hectares of land and a large number of facilities and that, in addition to the construction of new production facilities, it also intends to equip the territory of this part of the urban municipality of Palilula with infrastructure, thereby also investing in development and modernization of the entire area.

– With the completion of the planned investments, Al Dahra Srbija is expected to form the most modern agricultural complex in this part of Europe, on 44,661 ha – the government says in its decision.

It is added that the preparation of the General Regulation Plan for the area of the Municipality of Palilula, outside the scope of the General Plan of Belgrade for 2021, is also in progress.

When it comes to the construction of a factory for the processing of animal feed in Kovilovo, the urban project, prepared by the Belgrade-based company Bauprojekt, envisages a complex on 556,608 m2, which will feature two production halls for two processing lines for the production of animal feed using the method of the processing of alfalfa which is grown within the Al Dahra Srbija agricultural property, as well as eight storage facilities and side facilities.

It is added that the animal feed produced at the factory is to be partly used directly for the feeding of Al Dahra Srbija's livestock, whereas a part will be put on the market.

– After the factory is built, the majority of the cadaster parcel in Kovilovo designated for the construction will still feature a forest, and the planting of a green protective belt around the complex is also planned – the text of the project says.