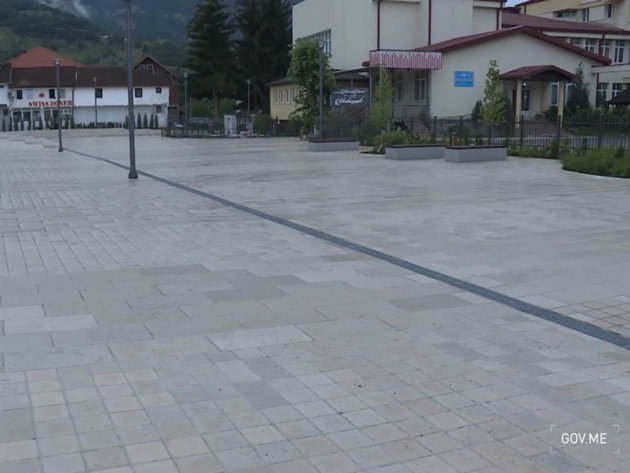 The newly opened square in Plav (Photo: Gov.me)
On August 6, Montenegrin Prime Minister Dusko Markovic opened the reconstructed square in Plav, visited several infrastructure construction sites and announced the beginning of the construction of a road from Plav to Decani, worth 15 to 20 million euros, the government's PR office announced.

– Over EUR 8 million worth of contracts have been signed for the development of Plav and its infrastructure. So far, EUR 5.2 million has been spent. Prnjavorska and Ribarska streets have been finished and opened, the first section of the Plav-Vojno selo road, one kilometer long, has been finished, and a route of over three kilometer on the Plac side has been established and the paving should take place in the next 10-15 days. So, there's intense activity here in Plav on developing the municipal infrastructure and improving the living conditions – the prime minister said.

Markovic announced two capital projects of great importance for the area and the entire Montenegro.

– In the next four years, we want to realize two large, very important projects, which are crucial for Plav and the entire Montenegro and its economy – Markovic announced.

The first one, he said, is the construction of the Plav-Decani road, on which they are working together with the authorities in Pristina.

– We are in the final stages of the preparation of the main project – Markovic said and added that the value of the investment exceeded EUR 15 million, more precisely, that it was between 15 and 20 million euros.

As Markovic said, the works on this project are expected to start next year. The plan is also for a joint financing of a tunnel, the most valuable investment on the route, to be agreed with the authorities in Pristina.