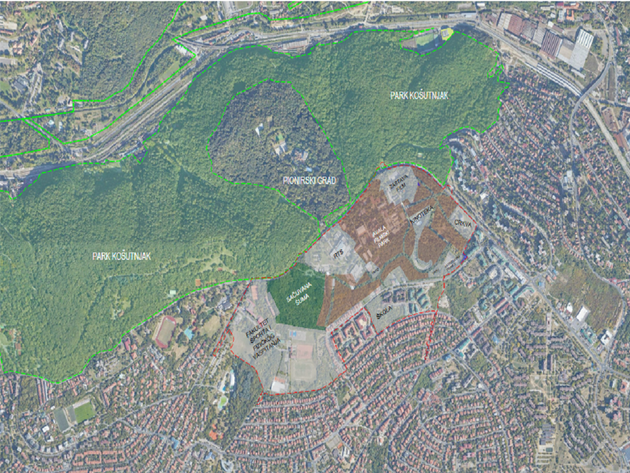 Avala Film Park, map (Photo: Avala Studios)
The forest in the location used by AvalaStudios, where the Avala Film Park is to be built, will not be cut down, the company announced.

– The area belonging to Avala Studios takes up around 40 hectares, of which quality forest covers 7 hectares. This forest will remain intact, and after the lanes, benches and side features are built, all citizens of Belgrade will be able to enjoy this new oasis – pointed out Peter Dajko, the CEO of Avala Studios, adding that all the other valuable trees in the area would be registered and preserved.

The company once again notes that the space belonging to Avala Studios is not part of the Kosutnjak Park, which is in public use.

– Due to decades of neglect, this area, which stretches from Kneza Viseslava Street down to Cerak and Zarkovo, is in a very bad condition. It has long since featured facilities of RTS, the Yugoslav Film Archive, Avala Film, a fire station, even an illegal concrete base which has been polluting the environment for around twenty years now. The built facilities are either entirely dilapidated or in a very bad condition, and most of the area is covered with wild shrubbery and weeds. Two large puddles have been present here for a long time as well, and are a source of potential infection and a gathering place for mosquitoes, and only packs of stray dogs roam the majority of this area – Dajko said.

Only logged-in users can comment.
Latest
Most read
MALI : DFC to arrive on Monday, implementation of agreement to begin 18.09.2020.
Confederation of Autonomous Trade Unions of Belgrade Asks for Higher Minimum Wage 18.09.2020.
Cable car in Kopaonik could be finished by winter – Rivalry with Zlatibor 18.09.2020.
CBS International and Cushman & Wakefield as Leaders in Regional and Global Real Estate Market 17.09.2020.
Zijin ceases operations in Bor Smelting Complex due to pollution – Technical reconstruction of complex announced 18.09.2020.
Blackberries, wine and Île-de-France sheep, choice of a young farmer from Bac – Work hard and you will be rewarded 17.09.2020.
Simpo offers commercial property for rent in Vranje, Bujanovac and Bor 10.09.2020.
Luxury Complex of Villas With Spa Center Under Construction Near Belgrade – Avalske Doline to be Completed in 2021 03.09.2020.
Weather
Weather forecast