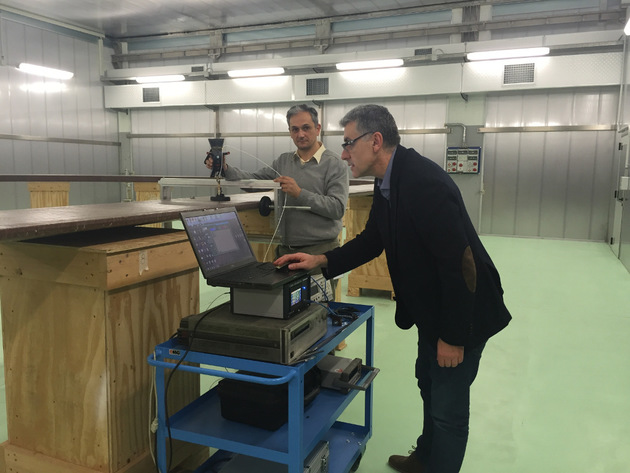 (Photo: Sentronis AD)
The Sentronis company, a tenant of the Science-Technology Park of Nis, develops and produces high-tech instruments for the measurement of magnetic fields and electric current.

There are various applications in the industry of the technologies developed by Sentronis. They are used in the car industry and consumer electronics industry, where the instruments are used for testing, quality control, research and development of magnetic sensors and actuators. The technologies are also used by companies which produce and transfer energy, such as hydro power plants, thermal power plants (for turbo-generators) and other similar facilities, where these instruments are used as components in the system of control, maintenance and monitoring. Finally, they are used by institutions in the field of fundamental research and development (such as research centers that own accelerators), where the implementation of these instruments is related to active control of magnetic fields, calibration of undulators and field mapping.

When it comes to the production process, Marjan Blagojevic, the director of Sentronis, explained to us how it works:

– We design Hall elements as physical components in the silicon technology (we own a patented design for horizontal and vertical Hall elements). Then, based on Hall elements, we design integrated Hall sensors in the standard CMOS technology. In order to reduce the noise and the offset of the Hall elements, the detected signal is additionally processed with the help of the so-called “spinning current” technique, which we also realize in an integrated circuit. The design of the integrated circuits is sent to a semi-conductor factory, which then sends us back silicon chips. We encapsulate these chips in special ceramic housing cases. There are also the procedures of making special thin cables and connecting the probe to external electronics, as well as the design and production of external electronics for calibration of key parameters. By adding digital electronics with an AD converter, micro-controller and display, we make a teslameter, which gives results in tesla or gauss units. It should be noted that our triple-axis teslameter is currently the most precise teslameter based on Hall sensors in the world market and that one of the clients is the European Organization for Nuclear Research (CERN).

In the world, Sentronis' brand name is Senis. The measuring components and systems are developed and produced in Nis. It is registered as a research and development center and one of the company's plans is to employ engineers.

– The company has several strategic goals related to technology. One of the plans is to develop new families of integrated magnetic sensors. Then, there's the further upgrade of the instruments and machines for the measuring of magnetic fields (development of cryogenic probes, calibration for large fields with the help of a super-conducive magnet, development of a magnetic camera). However, the problem we are constantly facing is the lack of good engineers, both in Serbia and the world. It is nearly impossible to find people who specialize in, for example, designing integrated circuits. A huge number of young people go into IT, that is, software, these days. On the other hand, few people turn to the processing technology, that is, hardware. If someone does opt for hardware, they're still oriented to digital electronics. However, the nature is not digital and there needs to be some sort of a connection between the analog world and digital electronics. On one side, that connection is made through sensors, and on the other, through actuators. In digital electronics, something either works or doesn't, whereas in analog electronics, the problem is much more complex – says Marjan Blagojevic.