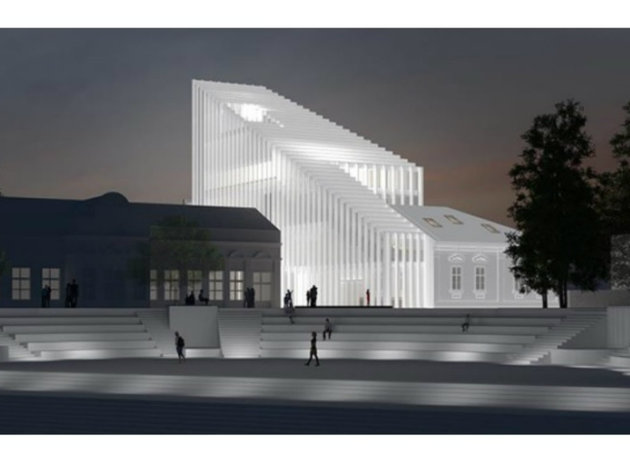 (Photo: Dejan Miletić, Milan Vujović)
The National Museum in Nis should get a new building, and the winning design at the contest, which opened in early 2020, was selected on June 11. The authors are Dejan Miletic and Milan Vujovic from Belgrade, with Luka Vujovic as an assistant.

– The offered solution adequately harmonizes the needs of protecting the legacy with the needs of modern social and cultural activities and tendencies. The design envisages a facility whose characteristic iconic form contributes to the skyline of Nis, making for a change and a new highlight in the city's landscape. Complying with the architectural typology of the context, the new museum facility is an integral and integrating spatial and programmatic structure and, as such, aims to have a positive impact on the overall cultural milieu of the city of Nis by promoting modernity and having an adequate approach to the protected historical context – it is said in the contest's catalog.

It is added that the authors' idea is to have the museum facility be not just a place meant to preserve and exhibit artworks and cultural heritage items, but primarily a place that would generate new cultural events in the widest sense of the term.

– One of the design's most important qualities is the flexibility of space, achieved by moving the structural elements of the facility to the outer layer of the building. This makes for clear, changeable and rational spaces – it is concluded.

Second prize went to Katarina Medar and third to Mladen Milic, both from Nis. Designs by Dusan Lilic from Nis and the group of authors MIT-ARH, Branislav Mitrovic, Djordje Alfirevic and Jelena Kuzmanovic from Belgrade were bought out. Acknowledgment was given to professor Ivan Raskovic, associate professor Milos Komlenic and Dr Vesna Mila Colic-Damjanovic.

The winning designs were exhibited at the “Sinagoga” Gallery in Nis until June 28. The contest was opened by the City of Nis and carried out by the PE Zavod za urbanizam (Urban Planning Institute) Nis.

Let us remind that the location of the new museum building in Jeronimova Street, not far from the Officers' Home.