Tesla Tower on Zlatibor to be 100 Meters Tall and Feature Science, Education and Research Center – Memorandum on Construction Signed 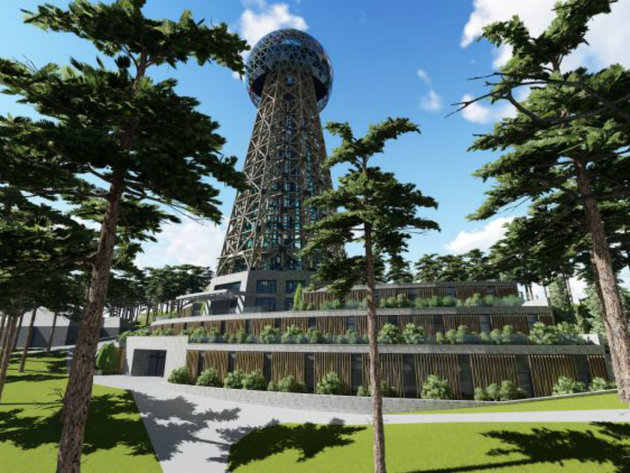 (Photo: Opština Čajetina)
The International Youth Science and Research Center Tesla Tower is to be built on Zlatibor, according to the Memorandum of Understanding signed by Branislav Mitrovic, the president of the Managing Board of the Science and Education Foundation Teslianum, a member of the Serbian Academy or Sciences and Arts and a professor at the Faculty of Architecture in Belgrade, and Milan Stamatovic, the president of the Municipality of Cajetina. In addition to the monumental tower of around 100 meters, the future complex, as said, will feature a science, education and research center, a museum and various interactive features.

The plan is for the tower to be built within the complex of the Zlatibor Dino Park, and Branislav Mitrovic said that it wouldn't be a replica of the demolished experimental tower built by Nikola Tesla in the U.S.A. over a century ago.

– If Tesla were alive today, I am sure that he wouldn't make the same kind of tower. Our intention is for the new tower to bring new energy, which identifies the current moment, and which is initiated by Tesla's thought vertical, his scientific, philosophical and moral approach – Mitrovic said.

As he added, it will be “an education center, a symbol of creative energy, an enlightenment project, a project of creative fantasy and the awareness of Tesla's importance.”

– Tesla is an inspiration, a role model, an initiator of good energy, and it is our intention to build all that into this project, together with everyone who wants to help us realize our initiative – Mitrovic said.

The Tesla Tower, which was presented in the form of an animation, will not be the final version of this facility. Mitrovic noted that it was only an initial conception and that, after it is developed in detail, procedures will follow pertaining to a preliminary design and the preparation of project and other documentation.

– The project offers us a lot of opportunities and the local self-government will support it. I hope that, very quickly, we will build this tower and expand the tourist offer of Zlatibor – Stamatovic said.

Slavica Maric, the PR manager of Teslianum, said that its founder was the Dino Park Zlatibor company and that the foundation, which, as she points out, has brought together the biggest experts from Serbia, was founded to promote and preserve Tesla's legacy among the young in Serbia and the region.

Hoping for the state's support, Stamatovic said that the law needed to be amended, as the current regulations, according to him “are not good for the development of a place like Zlatibor.”

– The announcement of this project will bring a new wave of investors who will see an opportunity for a quick profit there. They will want to build apartments and this is an opportunity to help us protect Zlatibor from those who want to put a blemish on it through unplanned construction – Stamatovic said.
Companies:
Opština Čajetina
Naučno obrazovna fondacija Teslianum
Tags:
Teslianum
Brana Mitrović
Milan Stamatović
Branislav Mitrović
Slavica Marić
Tesla Tower on Zlatibor
Nikola Tesla
Dino Park Zlatibor
construction of Tesla Tower
Tesla Tower
Share:

Log in to view complete information:
Forgot your password? Click here HERE
For free test use, click HERE
Latest
Most read
Korlace mine near Raska for sale 16.04.2021.
Zlatibor destination booking system has starts operating 16.04.2021.
As of April 19, Serbian citizens can travel to Greece 15.04.2021.
Tender announced for expert supervision over the construction of the Morava Corridor 15.04.2021.
Gas Heating, Investment That Pays Off Quickly – Things Needed to Connect to the Network 08.04.2021.
Food for Hikers New Business in Food Industry of Serbia – HikingFood Makes High-Calorie Meals Packed in One Snack 05.04.2021.
As of April 19, Serbian citizens can travel to Greece 15.04.2021.
VMC Building New Luxury Apartment Complex on Zlatibor 04.03.2021.
Weather
Weather forecast