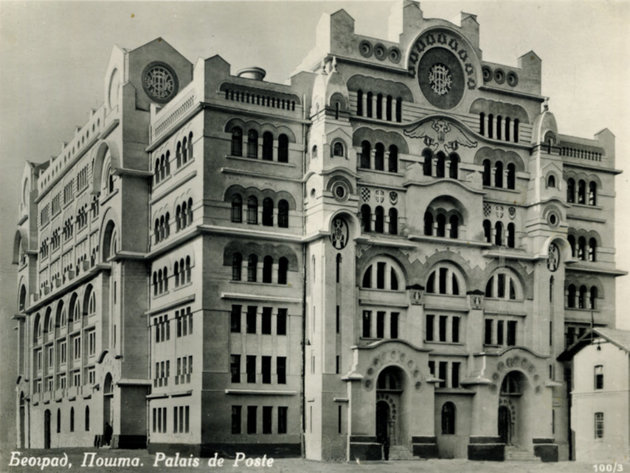 The Post Office building's facade in a Serbian-Byzantine style, designed by architect Momir Korunovic (Photo: Muzej nauke i tehnologije Beograd/ Nepoznati autor)
In addition to the ongoing reconstruction of the Sava Square in Belgrade, the plan is to also rebuild the Post Office building in that location, that is, for it to be brought back to the look it had before the bombing, said the head urban planner of Belgrade, Marko Stojcic.

– We will initiate the procedure for the completion of the Post Office building and for bringing it back to the state it was in before the bombing. We will try to have the facade finished by the time the Sava Square is ready for opening – Stojcic said.

The completion of the reconstruction of the square depends on the raising of the monument to Stefan Nemanja, which is supposed to arrive from Moscow, and as Stojcic said, the process is slowed down by the unfavorable coronavirus situation in Russia.

– It will certainly prolong the project. The idea was for the works to be finished by the end of the summer, but they will have to continue in the autumn as well. The raising of the monument will take a month and a half. When it is raised, there will still be some works remaining to be finished – Stojcic said for Studio B.

The famous building was raised in 1929 according to a design by architect Momir Korunovic. Many critics at the time considered it the peak of his work. The style is Serbian-Byzantine, the only authentic architectural style originating in the Balkans.

However, after it suffered major damage during the Second World War, it had to be reconstructed. The project was authored by architect Pavel Krat, a Russian emigrant, who considerably changed its exterior.
Companies:
Grad Beograd
JP Pošta Srbije Beograd
Tags:
Marko Stojčić
Momir Korunović
Pavle Krat
Pavel Krat
Sava Square
reconstruction of the Sava Square
monument to Stefan Nemanja
reconstruction of the Post Office building
Share: