“Never Let a Good Crisis Go to Waste” – What are the Perspectives for the Supply Chain in Central Europe?

Illustration (Photo: MOLPIX/shutterstock.com)
“Never let a good crisis go to waste”, Churchill famously said, and the participants in the webinar “Central Europe – Perspectives of the Supply Chain”, organized by the French Chamber of Commerce, agree.

Their conclusion is that the crisis of business operations caused by coronavirus can be viewed from a positive perspective and that the situation can be used for restructuring, reorganization and dedication to digitization.

Julien Autret, the regional customs attache for Southeast Europe and Balkans from the French Embassy in Serbia, said that the pandemic had substantially affected the transport, primarily road transport.

– Although the situation has stabilized, there's still a problem with the lack of personnel in some countries, and many border crossings are still closed. There was also a problem with supply from China. The fact is that no one could foresee this, just as no one can predict the end or the future, but the key is to adapt – he said.

The director of the regional chain of procurement and supply for Central and Eastern Europe at Lesaffre, Renaud de Saint Lager, joined the conversation from the Czech Republic. He said that the yeast market had grown five to ten times and that 15% more capacity had been required compared to the same period last year.

– The craft market ground to a halt, but household demand increased. The situation is now stable – he confirmed.

When it comes to supply and logistics, Piotr Dopierala, supply chain and logistics director at Auchan Retail Poland, said that the whole situation had initially caused shock and panic. The demands increased, and the suppliers were not ready.

– The structure of the demands changed, demands for flour, canned food and toilet paper increased. Online sales grew too. Limited capacity was a problem for suppliers, and transporters saw the traffic slow down. After two weeks, the situation improved – he clarified. 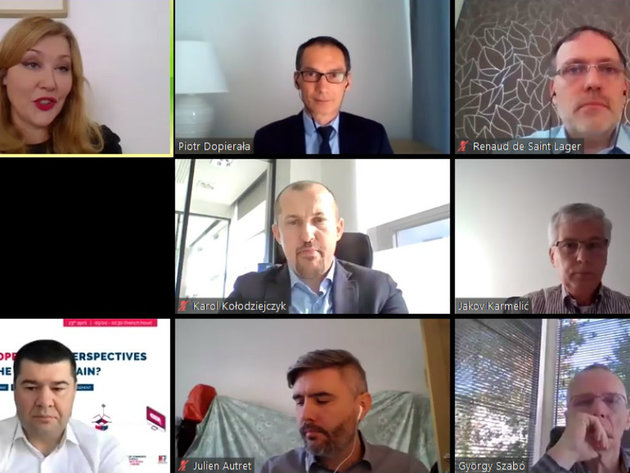 He added that it couldn't be predicted what the third and the fourth quarter of the year would look like, but also that the growth of the home delivery market was clear.

Gyorgy Szabo, the director general of Prevost Hungary, whose core activity is road transport of air cargo, says that the crisis is a big challenge for the supply chain. He believes that the future of business operations will be changed and that this form of transport will no longer be needed.

– The key to survival is good organization or reorganization, that is, the restructuring of business. We are looking at innovations and revolutionary solutions, such as automated trucks – Szabo believes.

Karol Kolodziejczyk, sales manager at the Polish road transport company Geodis, highlighted the problem of the automotive industry, noting that many companies were closed. He sees road transport as the field with one of the biggest problems and says that the solution lies in diversifying the market.

Stefan Gaibu, director general of the supply chain of Renault Group, called from Romania to say that the first problem was how to organize supply from Italy. However, he said, a solution was found thanks to big partners. Still, the situation is not great.

– Looking at the European market, the production dropped by 24% to 25% in March and April – he said.

Jakov Karmelic, director general of CMA CGM from Croatia, which offers the services of the transport of goods at four ports, noted that the traffic volume had decreased, but that operations remained largely unhampered.

– China is very important when it comes to container traffic, which dropped by 9%. This will certainly have an impact on our region – he concluded.