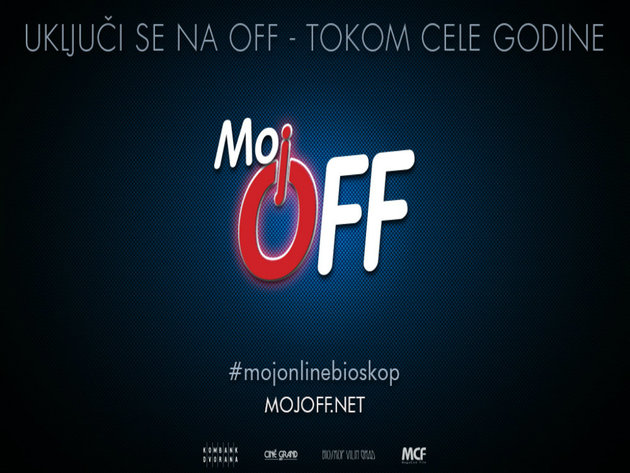 (Photo: MFC)
An online home cinema called MOJ OFF, a Premium Video on Demand (PVOD) platform which will be available throughout the year with an ever expanding repertoire of exclusive film titles, opens at MOJOFF.NET on Saturday, April 11.

On the first week, in addition to all the movies screened at the first Online Film Festival, MOJ OFF will show Liam Gallagher: As It Was, a documentary about the former Oasis frontman, in a world online premiere, The Whistlers, nominated for the Palme d'Or at the Cannes Film Festival, in a regional online premiere, Portrait of a Lady on Fire, the winner of the Best Screenplay Award at Cannes, shown at the Merlinka Film Festival, and an exciting SF tale Ederlezi Rising, directed by Lazar Bodroza.

Each week, two new films for children will be available at MOJ OFF. On the first week, titles shown at the previous two KIDS FESTs will be available for download – Ailo's Journey and The Ash Land – In the Hall of the Mountain King.

Each movie shown within the latest PVOD platform, launched by the distribution house MCF MegaCom Film, in cooperation with Kombank Dvorana, the multiplexx movie theater CineGrand and the movie theater Vilin Grad, will be downloadable at prices starting at 109 dinars, for a 24h period, and during the isolation on Mondays and Thursdays, as part of the #OSTANIKODKUĆE campaign, the visitors will be able to see a current festival title for free.

Among the movies available for free twice a week, Mondays and Thursdays, is Synonyms, directed by Israeli director Nadav Lapid, the recipient of the Golden Bear award and the FIPRESCI award at last year's Berlin International Film Festival. Local audience could see it at the FAF Auteur Film Festival, where the awarded Hungarian film Sunset, the recipient of the FIPRESCI award in Venice, was also shown.

The objective of activating the MOJ OFF platform is to set new standards of online film watching and to move cinema life to our homes in the days spent in isolation, but also in the spirit of the times and the progress of the global online culture tendencies.
Companies:
Kombank dvorana Beograd
Mcf Megacom Film Beograd
Tags:
MOJ OFF platform
multiplexx movie theater CineGrand
movie theater Vilin Grad
Online Film Festival
Premium Video on Demand
Liam Gallagher As It Was
The Whistlers
Portrait of a Lady on Fire
Ederlezi Rising
Ailo s Journey
The Ash Land In the Hall of the Mountain King
Synonyms
Sunset
Share:

Only logged-in users can comment.
Latest
Most read
eKapija's Anniversary: 15 Years of Operations as Another New Beginning 05.06.2020.
HORES Creates “Clean and Safe” Stamp for Tourist Facilities 05.06.2020.
All Festivals in Serbia to be Held This Summer – Events Very Important for Development of Tourism 05.06.2020.
Henkel to Expand Facilities in Krusevac 05.06.2020.
Real Estate Market Fully Recovers Upon Revocation of State of Emergency, Prices Unchanged – New Concepts for Retail and Offices 04.06.2020.
Henkel to Expand Facilities in Krusevac 05.06.2020.
Slovenia stops implementation of 5G technology 05.03.2020.
Agreement on Highway from Pozega to Brnjica, and Then to Boljare, in the Upcoming Months 03.06.2020.
Weather
Weather forecast