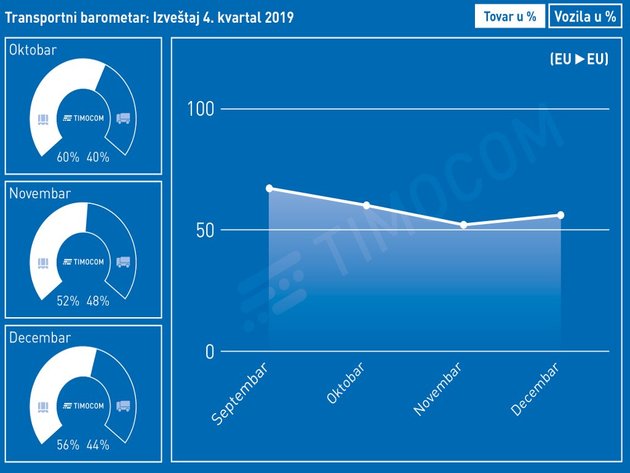 – In Italy, we recorded an increase in freight of 16% as compared with 2018 – says TIMOCOM Business Analyst Tilman Fecke.

The positive Italian results, according to TIMOCOM expert Fecke, can be traced back to the increased demand for consumer goods.

– We believe it is realistic to consider trade factors the driving force behind the export of Italian products. Such factors include, for example, Brexit and the import duties imposed by the USA on Chinese products – Tilman Fecke explains.

The approach of Britain’s withdrawal from the EU caused a strong and noticeable effect on the European transport industry, a sign that Fecke’s theory is correct. All 44 European countries included in the transport barometer reports increased their freight offers to the UK by 15% between the financial quarters 3 and 4.

The number of exports from Germany to the United Kingdom also grew in the fourth quarter of 2019 by approximately 11% as compared to the third quarter.

– The decision to move Brexit back three months to the end of January 2020 is another indicator that this increase is connected to political developments – Fecke says.

However, this short-term development did nothing to improve the overall trend: the amount of freight transported from Germany into other European countries over the last year sank by 12% as compared to 2018.

– Germany is one of the world’s major export nations, and is therefore more sensitive to the effects of a cooling economy. The drastic reduction here as compared to the total European numbers reflects that – TIMOCOM Company Spokesman Gunnar Gburek said of the development.

– Whether or not the negative trend will continue this year remains to be seen – but it seems probable – Gburek concluded.

TIMOCOM has been using the transport barometer since 2009 to analyze the development of transport offers and demand as found in the freight and vehicle space smart apps, which are integrated into the Smart Logistics System. More than 130,000 users generate up to 750,000 international freight and vehicle space offers daily on the exchange. The system helps over 43,000 TIMOCOM customers to meet their logistics goals smartly, safely and simply.
Tags:
Timocom
Tilman Fecke
Gunnar Gburek
transport offer in Europe
freight offer
export from Italy
export from Germany
transport barometer
Timocom barometer
app
logistics
Share: