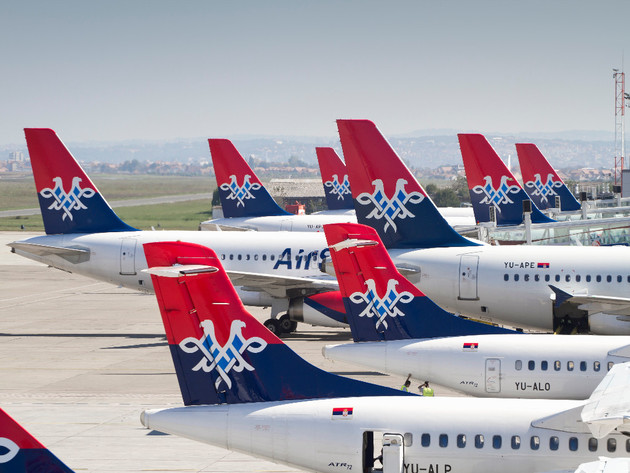 (Photo: Air Serbia)
Air Serbia enters 2020 with six new routes in Europe and the Middle East. With these new flights, the offer of the Serbian national air carrier, after the significant expansion in 2019, will continue this year. Starting June, the national airline will establish routes from the Serbian capital to Geneva, Amman, Rostov-on-Don, Florence, Lviv, and Chisinau.

The Serbian flag carrier will operate two weekly flights between Belgrade and Florence in central Italy, on Tuesdays and Saturdays. Flights to the west Ukrainian city of Lviv will be operated four times a week, on Mondays, Wednesdays, Fridays, and Saturdays. Belgrade and the Moldovan capital Chisinau will be connected with four weekly flights, on Mondays, Tuesdays, Thursdays, and Sundays.

In addition to the new destinations, Air Serbia will be improving connectivity by adding new frequencies on existing routes, such as Prague, Zagreb, Tirana, Skopje, Bucharest, Ljubljana, Dubrovnik, Tivat, and Larnaca. When it comes to Istanbul, the destination launched two months ago, from April the Serbian national airline will increase the number of weekly flights from the existing three to seven times a week.

– We continue the successful year in which we achieved a record number of passengers carried, but which also saw a great expansion of the network and the launch of operations from two other airports in Serbia. Our goal is to remain the airline of choice for all passengers from the region and to thus support the further economic and tourist growth of the Republic of Serbia. In addition to expanding the reach of the international network, we continue to improve the quality of service based on new trends in the airline industry, as well as the opinions of our passengers – said Duncan Naysmith, CEO Air Serbia.

Log in to view complete information:
Forgot your password? Click here HERE
For free test use, click HERE
Latest
Most read
Agriculture Conference to be Held Instead of Agro Belgrade Show 01.03.2021.
Another 1,000 Jobs in Loznica by Mid-2021 01.03.2021.
GDP of Serbia Drops 1.1% in Q4 2020 01.03.2021.
Air Serbia Starts Flying to Geneva 01.03.2021.
Application of Employers for Payment of Half of Minimum Wage Begins on March 1, Citizens to Start Applying for EUR 60 Aid from April 28 01.03.2021.
Vlasina Lake, Tourist Pearl That is Yet to Fully Shine – Reconstruction of Hotel, Construction of Spa Center and New Vacation Houses Planned 01.03.2021.
Preparations Ahead of Beginning of Construction of Railway from Novi Sad to Subotica – Contractors Have 33 Months for 108 km Section 01.03.2021.
Reconstruction of Nis-Zajecar Railway to be Completed in June 28.02.2021.
Weather
Weather forecast