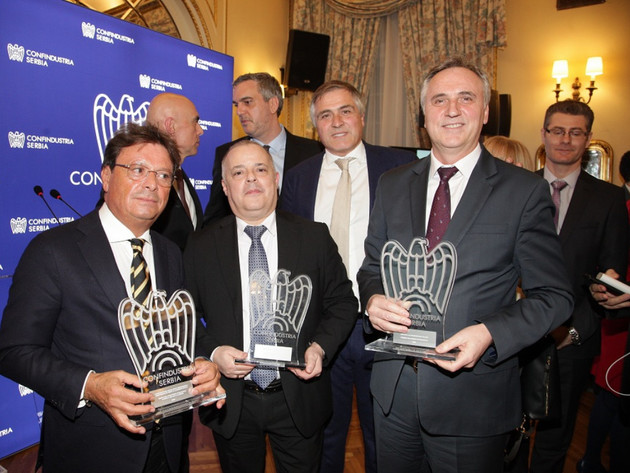 (Photo: Konfindustrija Srbija)
The Public Meeting of the Association of Italian Industrialists in Serbia – Confindustria Serbia, which has been operating successfully in Serbia for eight years now, was held on February 4 in the presence of numerous eminent guests, representatives of the Government of Serbia, the Embassy of Italy, as well as members, associates and friends of this association.

The event was an opportunity for the newly elected president of Confindustria Serbia, Patrizio Dei Tos, and his team to present the association's results, future plans and activities toward a successful continuation of the development of good economic relations of Italy and Serbia to the benefit of both countries.

The new president of Confindustria said on this occasion that close and constant cooperation with local institution was one of the priorities for business people doing business in a foreign country.

– This state provides us with something that's very valuable to our operations, namely, associates, who come from a culture of workers, which gives them the skills, a professional approach and identity, all of which facilitates things for Italian companies in Serbia – Dei Tos said.

The First Deputy Prime Minister and Minister of Foreign Affairs of Serbia, Ivica Dacic, said that the two countries had a long tradition of successful cooperation, which had been been further improved over time and was constantly confirmed.

– Italy is one of the largest investors in the Serbian economy, and, so far, Italian companies have invested around EUR 3 billion in Serbia and employed 26,000 workers – Dacic said.

The president of the Chamber of Commerce of Serbia, Marko Cadez, reminded that Italy was an important foreign partner of Serbia and that Italian companies contributed to its economy.

– What we will all work together on is bringing more Italian partners to Serbia and having our companies export more. The current export of Serbian products to the Italian market is EUR 3.8 billion, which is a great success – Cadez said.

At the Public Meeting, annual awards were given to the most successful members of Confindustria Serbia in three categories: corporate responsibility, contribution to dual education and support to Italian economy.

The Corporate Responsibility award was won by Elektroremont from Subotica.

In 2019, the realization was increased by around 20% compared to the previous year, big projects were done for EPS, the four-year contract on installing new generators at HPP Zvornik was completed, and repairs and overhauls were done at NIS, Petrohemija Pancevo (the engine of an 8-MW compressor) and HPP Ozbalt in Slovenia (generator), the company's commercial director, Antun Mesaros, says for our portal.

– The program of overhaul and production of synchronous machines, which had been defined four years before, was fully realized in the market in 2019, and this program will become dominant in Elektroremont's operations in the upcoming years. This is confirmed by the jobs contracted for 2020 and 2021. In 2019, the number of production workers was increased by 15%, which we consider a great success, considering the current state of the skilled labor force market.

We see the fact that Elektroremont is chosen as partner on big projects by large world companies such as Voith, Siemens, Toshiba, CG Electric and others as a special kind of acknowledgment of our expertise and the quality of our services. This year will be a year of the completion of investments and the beginning of new ones, which should help Elektroremont become a leader in the market of specialized services for electric machinery in the Balkans region – Antun Mesaros says for eKapija.

In the category “Contribution to Implementation of Dual Education System”, the award went to Aunde from Jagodina. The company started producing car seat covers in Serbia in 2015, with around 200 workers, and the entire production was directed at the local market.

In under three years, the number of employees grew to 750, whereas the exports now make up around 80% of the production, Annino de Venezia, the director of Aundo, told eKapija.

– In 2017, we started cooperating with the Italian Embassy, Confindustria and the Ministry of Education, to the end of realizing the dual education program. It was exactly what we expected in 2015, an agreement with a high school in Jagodina. Aunde provided industrial machines for the school and in 5 years we employed around 40 students.

Today, Aunde is one the main suppliers of companies such as FCA, Mercedes and Iveco.

– Recently, Aunde was entrusted with the project of producing covers for the electric Fiat 500. This is one of the projects we were hired for thanks to the good work of our employees in Serbia and the great job done by our director in Turin – Annino de Venezia said for eKapija.

The award for “Support to Italian Economy” was won by the National Employment Service.

On this occasion, the director of the National Employment Service, Zoran Martinovic, thanked the representatives of Confindustria, as well as the companies the NES cooperates with, especially Olimpias Knitting (Benetton) from Nis, which has been using the NES's services since 2011 and which has managed to employ more than 2,000 so far through the agency.

As the NES told our portal, there's also the cooperation of the agency's office in Sremska Mitrovica with companies Labor SRB and Modine, members of Confindustria Serbia.

– The cooperation was established on the day these companies were founded. Labor SRB has 60 employees and is in the wood cutting and processing businesses. They use our services in employing people. Modine produces cooling equipment and employs 270 people. Each year, it takes part in job fairs, and it has also used the services of professional selection and mediation in employment – the NES said.

Also, as they told eKapija, the agency's office in Jagodina has a long-standing cooperation with Italian companies Vibac Balcani, which produces special adhesive tapes for industrial use, and Aunde SRB.

– These are non-financial measures which the National Employment Service provides in mediating in employment per application and taking part in job fairs. In 2019, we mediated in the employment of around 50 enforcement officers. Vibac Balcani mostly needs operators of electrical and mechanical equipment in various production divisions, whereas Aunde SRB needs textile workers – the NES told eKapija.