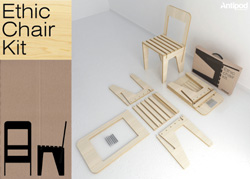 - The prototypes of the winning works from the first open competition for eco-furniture design "Sitting green" were presented last night (December 3, 2009) in furniture showroom "Nitea" - people from "Nitea" announced.

The open competition was organized by the Belgrade Design Week and USAID Competitiveness Development Project in Serbia , and USAID is going to use these prototypes to promote the sale and export of that furniture.

The prototypes of the winning works were made by Pančevo-based furniture factory "TMB Diamond".

The winning works will be on display in showroom "Nitea" in so-called "Serbian corner", which was officially opened last night with the aim of promoting domestic design.