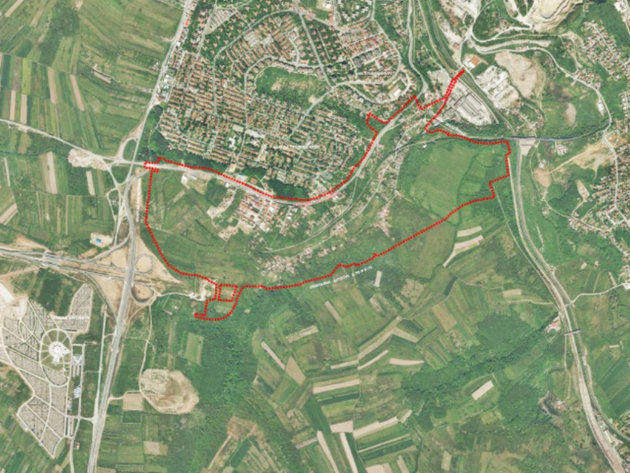 (Photo: Urbanistički zavod Beograda/printscreen PDR)
A large, modern urban settlement with business zones might be raised within the Belgrade neighborhood of Kijevo, in the area around the Mala Krsna-Ostruznica railway and partially along the Kijevo Creek.

The Secretariat for Urban Planning and Construction of Belgrade has put the Draft Detailed Regulation Plan of the area between the bypass route and the ringroad near Kijevo, in the Municipality of Rakovica, covering the cadaster municipalities Knezevac and Resnik, up for public review.

Under this document, which is available for public review between January 20 and February 21, 2020, and which was prepared by the Urban Planning Institute of Belgrade, the construction of residential and commercial zones, mixed city centers, sports features and two business zones is planned on the area of 97.75 hectares.

A total of 1,214 apartments are to be built on the area covered by the plan, which currently features illegally built family housing facilities.

The new settlement will have 3,521 residents, which is nearly three times as many as it currently has, whereas the number of employees will grow several times, from the current 34 to 1,862.

As for the sports facilities, there will be a sports hall, outdoor football, basketball, volleyball, futsal, handball and tennis courts, as well as balloon halls.

Furthermore, public purpose facilities, which the area currently lacks, will be built as well, namely, a preschool institution, a primary school and a welfare facility.

The new preschool institution, which is planned in Knezevac on an area of 7,108 m2, will be able to take in around 270 children, whereas the new primary school will be built for around 390 children.

No new primary healthcare facilities are planned in the area covered by the plan, but a location for a working unit of the welfare institution in Knezevac is defined within it.

This ambitious construction plan will need to be accompanied with adequate infrastructure, so the plan includes the construction of new traffic routes and an expansion of the existing ringroad, along with the construction of three new connections, routes for utility vehicles and new bus stops, and an adequate number of parking spaces, in line with the number of residents and employees, is planned as well.

Considering the development plans for the railways and the Spatial Plan of the Republic of Serbia from 2010 to 2020, which entails the development of a rail hub in Belgrade, the plan also includes the expansion of the existing streets in the spots where they pass under the railway. The plan for the public traffic areas includes the establishment of tree alleys, and the entire neighborhood will have a protective green belt and a green corridor in the zone of the existing waterways.

The existing system will be used for water supply, and since the area currently does not have a precipitation drainage system connected to the city's sewer, the plan includes the construction of a sewer and canals for the collection of precipitation.

When it comes to the power network, the possibility of having a substation for each planned facility is envisaged. All the traffic areas are to be equipped with installations.

Considering that the area lacks heating and gas systems, a heating pipeline and low-pressure polyethylene gas network are planned as well.

The plan also covers the water part of the area and the accompanying infrastructure and entails the construction of new bridges and road accesses to water surfaces.