(Photo: saiko3p/shutterstock)
According to the Detailed Regulation Plan for the Nikola Tesla Airport, the construction of another inserted runway, as well as a hypermarket, outlet and retail parks, a hotel and a congress-business center, is planned. An underground railway station is also planned within the complex.

The initiative for the preparation of the Plan was launched by AD Aerodrom Nikola Tesla Beograd. For the part of the plan pertaining to the existing complex of the airport, based on the strategy of development which defines the reconstruction of the runway and the implementation of an inserted runway by 2043, the concessionaire and operator of the Nikola Tesla Airport, VINCI Airports Serbia (Belgrade Airport doo Beograd) has prepared a spatial-program solution defining development through construction and reconstruction, maintenance and management of the infrastructure of the existing airport complex.

The proposed borders of the DRP cover the existing complex of the Nikola Tesla Airport, the area planned for the further development of the airport, the protection zones of the airport, a part of the area of the spontaneously established residential zone and the space planned for business and commercial features, in the part south of the highway. The area covered by the Plan amounts to around 1869,6 ha.

The planned traffic corridors and the borders of the zones of protection of airport complexes have conditioned a division into five spatial units, within which the characteristic purposes and features are grouped. 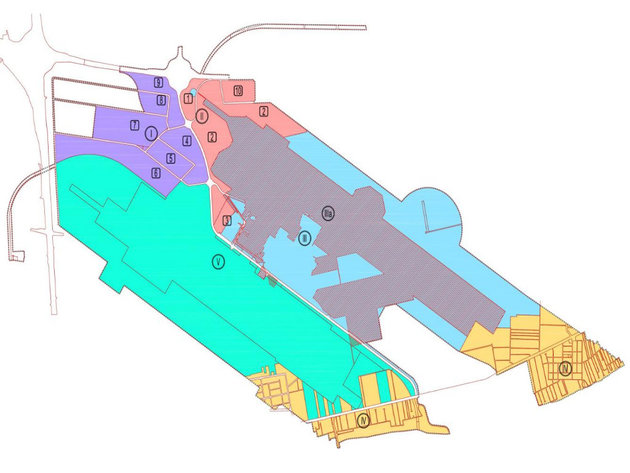 
The plan for Unit I entails areas for business zones, such as logistics centers, forwarding, business parks and warehouses.

Unit II includes blocks of other purposes, within which areas for commercial features, business zones and a separate complex of the Aeronautical Museum are planned.

– Considering the proximity of the highway and the planned capacity of traffic, as well as the deficit of side features along the airport complex, these two units have the biggest development potential within the area covered by the plan – the Plan reads.

The plan for Unit III entails public traffic areas within which the existing airport complex and the public green areas (the protective green belt of the airport) are defined.

Unit IV covers the blocks of the spontaneously formed residential areas in the contact area of the airport complex and the space planned for the future development of the airport (units III and V), as well as the territory south of Vojvodjanska and Surcinska streets. The plan defines the conditions for addressing of a part of the unplanned construction, whereas new construction and utility infrastructure capacities are not allowed.

Unit V covers the planned public areas meant for the complex for the development of the airport and public green areas – the protective green belt. The area is reserved for the construction of another runway (PSS2) with the accompanying infrastructure, a new passenger terminal and the accompanying service, logistics and technical features. This unit should also feature the facilities and features of a railway infrastructure (a two-track railway, a passenger and cargo railway station and maneuvering tracks). 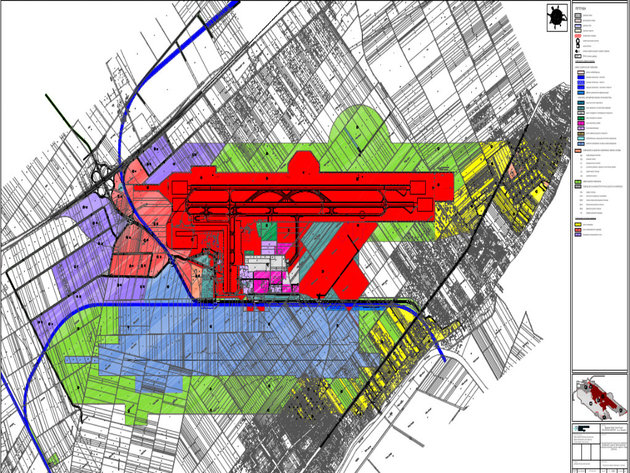 
The plan defines an airport complex consisting, in line with the specific features and purposes, of the following functional zones:

The passenger terminal zone entails the basic airport features for visitors, the handling and dispatching of goods and passengers, along with all the necessary side features in the domain of security, administration, commercial and services meant for all the users. The plan for the zone includes the reconstruction and extension of the current integrated terminal and the repurposing of the control tower building upon moving to the new facility.
The zone of service and logistics features covers the widest range of side features and facilities necessary for airport operations and an adequate functioning of the airport complex, as well as cargo air transport with complementary purposes. The zone should feature facilities and complexes of the flight control service, customs, post office, airport cargo service, catering service, a complex for the supply of jet fuel, administrative facilities of the airport operator, accompanying storage and service facilities, a fuel station and a parking lot meant for the visitors and the employees.

The zone of special purposes covers the departments for specific security requirements: a complex for the Helicopter unit of the Ministry of Internal Affairs, Air Service of the Government of Serbia (SN4) and facilities and operational grounds for fire and rescue service of the airport. The plan for the zone includes the removal of the existing fuel depot beside the fire service unit, keeping the current quality buildings and construction of new facilities (auxiliary buildings and hangars). The part of the complex housing the helicopter unit should feature new hangars, antenna mast, a garage, underground warehouse and new heliport. Alternative road access to the complex outside of the restricted airport zone is also planned.

The zone of technical services covers facilities for repair and technical maintenance of aircrafts. The plan is to upgrade the airport maintenance service by reconstructing the existing buildings and building new hangars, warehouses, workshops and other facilities and areas.

The airport complex represents the base of operation for the national air carrier Air Serbia whose existing facilities (hangars, catering service and administrative facilities, etc.) are located in the zone of airline carriers. Upgrading the respective content should be done by building new facilities (hangars, flight simulator and accompanying buildings and administration offices) as well as with the construction of new hangars and the necessary infrastructure intended for general aviation and other airline companies.

The complex reserved for future airport development is located within Unit V and encompasses the areas designated for the future development of the airport and project realization after 2043.

The plan for the complex also features an underground passenger railway station, whose exact position and dimensions will be determined through the design of urban planning project based on the general project and technical documentation. Through conducting the per-feasibilty study with the general design and after cooperating with the relevant authorities and public service companies the concrete content, capacity of construction and solutions to traffic and communal infrastructure should be determined.
The Secretariat for Urban Planning and Construction of the City of Belgrade has put the preliminary design of the detailed regulation plan for Nikola Tesla airport complex in Belgrade, city municipality Surcin, New Belgrade and Zemun along with the Report on the strategic assessment of its impact on the environment up for public review.