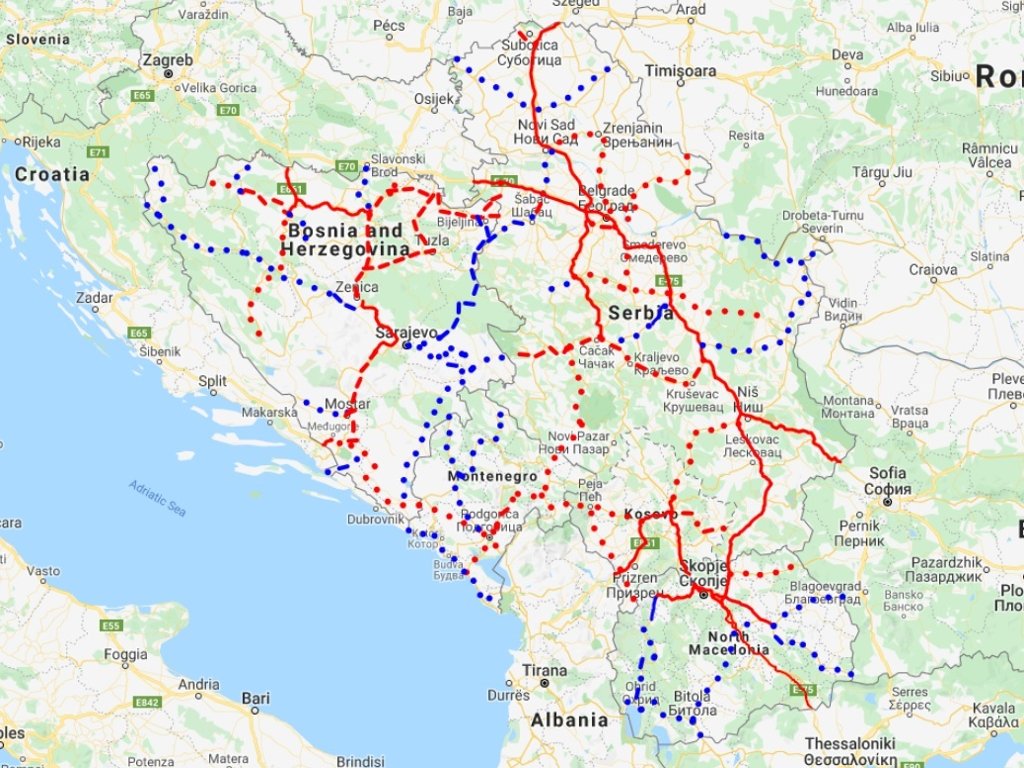 The eKapija portal has made an info map displaying all the highways and high-speed routes which have been built, are being built, will be built, may be built or have been announced in the Western Balkans.

We are, of course, focusing on Serbia. If there's a good argument for a state needing a modern traffic route network, it is, we believe, a good map. It helps us to size up our country to the extent that enables us to see, from the perspective of Belgrade or any other perspective, that there should be no citizens, villages and towns of first, second or who knows which class. Until Cacak was connected by highway to Belgrade, it was not wrong to say that western Serbia, in terms of infrastructure, was neglected, something that the heart of Sumadija, unfortunately, still is: a territory without a kilometer of a modern, fenced-off, four-lane highway or a modern railway. So close, and yet so far. What about Timocka Krajina and Negotinska Krajina, semi-isolated continental islands? A lot becomes clear when we see the map. At the moment, new and future roads are an important topic in Serbia. The Milos Veliki highway, Morava Corridor, Belgrade-Sarajevo through Sremska Raca, Ruma-Sabac with an extension in the form of a high-speed road to Loznica, two gorges beyond Nis... Almost everyone in Serbia has been wondering lately where to drive or which road they will use in a few years.

As an investment and business portal, eKapija supports the enhancement of business and all other connections, as well as construction activities. Whether every highway that is being built is economically feasible is hard to say. Experts have been saying for decades that a highway is built only once the average annual traffic on a route reaches 10,000 or 12,000 vehicles. On the other hand, such discussions mean little to the families of the many killed on the Ibar Main Road.

Are, however, only full-profile highways safe? Experts say no, reminding that there are various semi-profiles which enable a reduction in the number of accidents. However, it should be kept in mind that this is not a time when the state is actively avoiding economic trends, especially in development projects. The entire region, for example, pays airlines, both local and foreign, to connect it better with the world. It pays off in the end, they say. Next year, Belgrade will be looking at the construction of the first subway line, worth around EUR 2.5 billion. Such projects can repay the capital costs only in multi-million Asian cities. Still, subways are being built all around. It's similar with highways. No one want's to be disconnected from the world. It seems that we will have to pay this cost as a society. But, to what extent? Traffic policy is another question of general interest about which there is practically no public dialogue.

Who will pay for all this? Who will repay the debts. All of us, but, if the effects of the building of the new roads make the country richer, the debt will be proportionally smaller. Who will profit from this? There's the dilemma, because, after decades of being used to having all sorts of facilities in the country built by local construction companies exclusively, we've now gotten used to relying on engineers from Shanghai and physical workers from the Indian subcontinent. That makes the works quicker, but leaves too little money in Serbia.

Ancient Romans first built fortifications and then roads: that's how they conquered territories too. In Serbia, not many people live lives worthy of the 21st century. That's why they're seeking their fortune in the overcrowded, overpolluted capital, or abroad. Highways are not enough – one of the most economically healthy countries in the world, Denmark, has no more highway kilometers per capita than Serbia – but are necessary. A serious investor will not raise a factory without a serious road (often also a railway). When our mountains, spas and historical sites can be reached from the Belgrade area in only a few hours, these areas, which account for nearly half of Serbia's GDP, will become more available to hundreds thousands of potential guests. Belgrade will thereby also be able to repay a part of its “debt” to the province.

Can all this pay off? Will the politicians in Serbia and the neighboring countries be able to stop promising a highway to every village? We don't have a crystal ball, but we do have the map and we can track what they're doing.