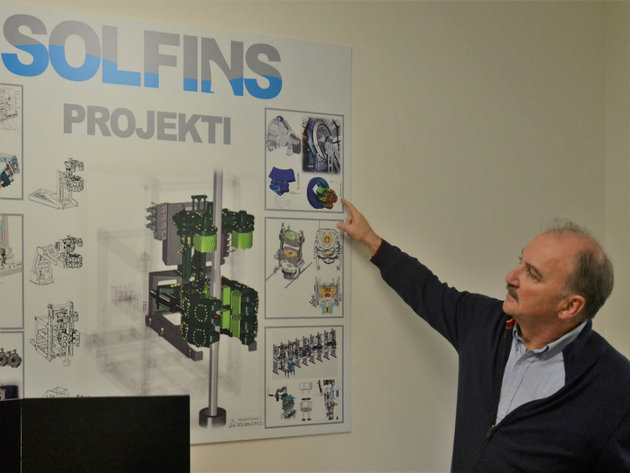 Predrag Radovanovic graduated from the Faculty of Mechanical Engineering in Belgrade in 1985. He finished his Design for Manufacture and Assembly master studies at the University of Rhode Island in 1989. After years of working on designing and producing systems for fast automatic assembly and production of electric engines and coils in the USA, he founded the engineering company Solfins in 2004.

Srdjan Zivkov joined him in 2005 and became a partner in the company in 2014. Ever since its founding, the number of Solfins's clients has been growing year by year thanks to the patient investing in the building of a professional team which puts service quality in the first place at all times. Solfins now has a large number of clients, implementing advanced 3D technologies, software solutions and consulting services in the fields of product development and production technologies, machine design and solutions for reverse engineering and 3D printing. Solfins's team has a great reputation in designing automation machines among foreign clients, owns patents in the oil industry, and one of the machines designed for a Canadian client won the award of a North American petroleum association for an innovative engineering solution in 2015.

Predrag Radovanovic is married and has three grown children. He is a passionate fisherman and one of the founders of the United Fishermen of Serbia, an association which works on protecting the waters and the fish population of Serbia. He is also an amateur photographer. On top of that, Radovanovic maintains a garden and an orchard on the land he inherited from his family.

We asked Predrag Radovanovic what the highlights of 2019 were according to him.

– Solfins cooperates with numerous successful companies in Serbia, which have been recording an impressive growth year after year. This year, most of them are having trouble finding new employees and having their employees leaving the country. This problem stands to seriously jeopardize the economic growth of Serbia.

– The state continues to bring foreign investors without consulting with the local companies. Not only do they get substantial subsidies and support not provided to local companies, but they often jeopardize their growth by competing for the workforce. There's no doubt that Serbia needs foreign capital and knowledge, but there's also no doubt that Serbia now has successful, propulsive companies which need to be supported in order for Serbia to develop. The state should condition the support to foreign companies with investments in the development of new employees and cooperation with the local economy where there are conditions for it.

– Aleksandar Panic – one of the founders of the ORSP (Odbranimo reke Stare Planine – Stara Planina Rivers Defense) movement. From the moment everyone learned about the project of construction of derivation SHPPs, proven to be extremely destructive to biodiversity, he instigated the residents of the villages on Stara Planina, Pirot and environmentally aware activists from the whole country to organize. Thanks to his enthusiasm and personal sacrifice, OSRP is now the backbone of the movement fighting to preserve the mountain rivers.

– The Chamber of Commerce of Serbia's inclusion of business people in the preparation of the Industrial Strategy and Policy of the Republic of Serbia for the upcoming decade.

– It's puzzling that more attention is not paid to preserving the fish population. This affects the waters and lowers the interest in fishing. Recreational fishing can be very profitable. For example, the income from the fishing of just one species, the striped bass, on the American east coast, is USD 2 billion. In Slovenia, in upper Soca, they earn over USD 2 million a year from recreational fishing. Hungary, whose populace is not much larger, sells seven times as many fishing permits as Serbia.

By making more effort to protect the waters, we could turn the Drina, the Vlasina Lake, parts of the Danube and many other waters in Serbia into profitable tourist sites for fishing, which would make a considerable contribution to the development of the regions which are now dying out. Instead, our fishermen spend money in Spain, Sweden, Italy and many other countries, whereas foreign fishermen avoid us.

– I expect the upcoming year to be exciting and challenging as well. New solutions for efficient and productive machines and new technologies need to be found and implemented so that our clients could be as competitive as possible, and at the same time we will have to fight for clients against the competition.
Companies:
Solfins d.o.o. Beograd
Privredna komora Srbije
Ujedinjeni ribolovci Srbije
Mašinski fakultet Beograd
Tags:
Predrag Radovanović
Srđan Živkov
Aleksandar Panić
University of Rhode Island
Drina
Vlasina Lake
Danube
Odbranimo reke Stare planine
ORSP
3D technologies
software solutions
consulting services in the fields of product development and production technologies
machine design
solutions for reverse engineering
3D printing
event of the year
miss of the year
personality of the year
best move of the government
worst move of the government
expectations for 2020
highlights of 2019
event of 2019
miss of 2019
personality of 2019
best move of the state in 2019
worst move of the state in 2019
Share: