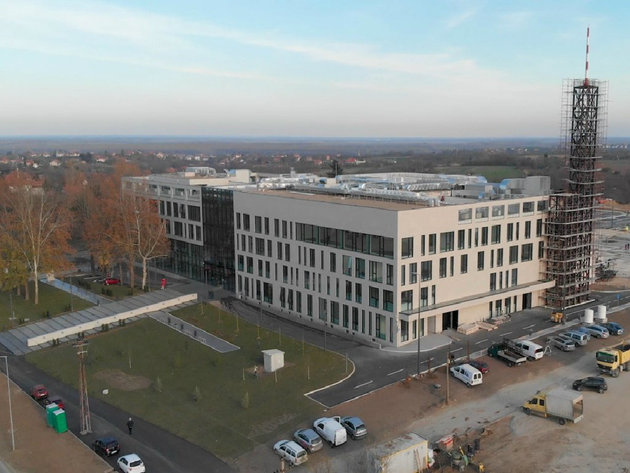 New RTV building (Photo: Pokrajinska vlada)
The construction of the new building of the Radio-Television Vojvodina has been completed in Miseluk.

The investment is worth RSD 3.2 billion and was financed by the Government of the Republic of Serbia and the Provincial Government, as one of the joint infrastructure projects in the Autonomous Province of Vojvodina.

The works on the construction of the new building of Vojvodina's public service began in August 2017 with the demolition and removal of 26,879 cubic meters of the ruins of the old building, which had been demolished during the NATO bombing of 1999. As said, the construction was completed four and a half months before the expiration of the deadline.

The procurement of the equipment worth RSD 569 million, which is also financed by the Provincial Government and the Ministry of Culture and Information, is in progress, whereas the funds for the landscaping and the equipping of the facility with the necessary utilities were provided by the City of Novi Sad.

Log in to view complete information:
Forgot your password? Click here HERE
For free test use, click HERE
Latest
Most read
Law on Loan from German KfW Bank for Reconstruction of VMA Building Adopted – Energy Efficiency Worth EUR 50 Million 26.02.2021.
BRNABIC: Serbia Not to Export Lithium as a Raw Material 26.02.2021.
New Measures from the Crisis Response Team – Shopping Centers, Cafes and Restaurants Open Until 2 PM This Weekend 26.02.2021.
Tender for Contractor for Building of Nis-Dimitrovgrad Gas Interconnection Next Week 26.02.2021.
Swiss Textile Company Albiro to Establish Regional Logistics Center in Uzice – New Owner of Kadinjaca Factory to Invest in the City on the Djetinja River 25.02.2021.
Guca to Get Luxury Tourist Complex with Wellness and Spa Center – Hotel Nordic to be Reconstructed, Investment Worth EUR 2 Million 27.12.2020.
A Step Closer to the Construction of the Airport Garden Complex – Business and Residential Buildings to be Raised on 20 ha of Land Next to Airport City 29.12.2020.
Steel Impex to Start Building Recycling Center in Krnjesevci 08.11.2020.
Weather
Weather forecast