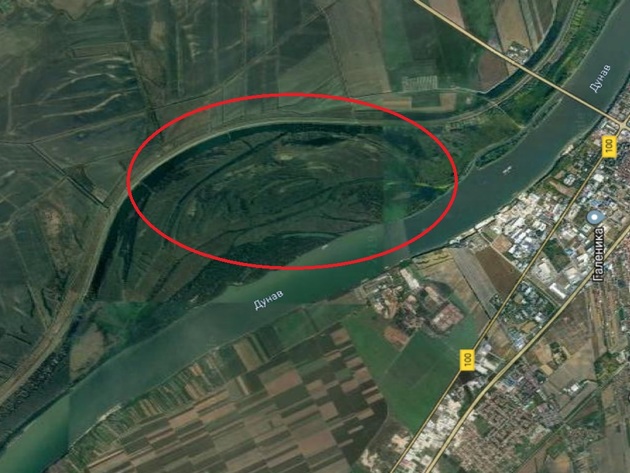 The planned location of new Belgrade port (Photo: Printscreen Google Maps)
According to the draft budget for 2020, RSD 168 million will be set aside for designing a new port in Belgrade, and the first works are expected by the end of 2021, the Ministry of Construction, Transport and Infrastructure told Tanjug.

This will be one of the largest and most modern intermodal transport hubs in the Western Balkans, with a reloading capacity of three to five million tons of various kinds of cargo, and it will most likely be located not far from the Pupin Bridge, said the assistant minister for water transport, Veljko Kovacevic.

He told Tanjug that the exact location was still being sought, but that the location upstream from the Pupin Bridge had the greatest potential. The construction of an industrial-technology park in Borca, together with partners from China, is planned as well.

When asked about the current port, Kovacevic says:

– The issue of the current port is solved in the General Urban Plan of Belgrade. It envisages the development of commercial features. Who is to run this project and how depends on agreements and the solving of the dispute between the Port of Belgrade and the City of Belgrade. As a state, we do not interfere here. What's important to us is to say through the General Urban Plan of Belgrade that the port will keep working in its current location until the new one is built, in order to enable the connection from the river.

According to the preliminary estimates, the total value of the construction of the port of Belgrade, Kovacevic adds, is around EUR 180 million, of which EUR 90 million is the value of the port infrastructure.

– Serbia plans to take out a loan from the European Investment Bank and probably from the European Bank for Reconstruction and Development for a part of the amount of EUR 90 million and build the port infrastructure, and the remaining funds should be secured through the investment of the port concessionaire – Kovacevic said.

The state has already gotten a grant from the EU in the amount of a million euros based on which a preliminary feasibility study with a general project for the new port is being prepared, so the value of the design project is nearly three million euros.

The new port, Kovacevic points out, will be a modern intermodal hub which will connect the road and the rail Corridor 10 with the Rhine-Danube waterway corridor.

The new Belgrade port will have all the terminals a modern port is supposed to have, including a container terminal, a ro-ro terminal, as well as a terminal for bulk cargo and an oil terminal.
Companies:
Ministarstvo građevinarstva, saobraćaja i infrastrukture Republike Srbije
Tags:
Veljko Kovačević
ports in Belgrade
new port in Belgrade
new Belgrade port project
Share: