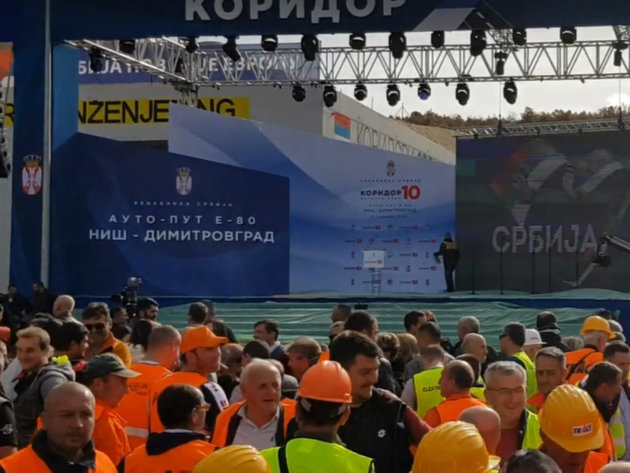 (Photo: YouTube/screenshot)
The section of the eastern leg of Corridor 10 to the Bulgarian border has officially opened to traffic, marking the end of the works on this corridor through Serbia.

The total length of the entire Corridor 10 in Serbia amounts to around 813 kilometers, and its eastern leg from Nis to Dimitrovgrad has a total length of 86.9 kilometers, Novosti reports. A trip between Nis and the Gradina border crossing now takes only around 50 minutes.

The sections on the eastern leg of Corridor 10 which have opened to traffic are the sections between Prosek and Crvena Reka, of the total length of 22.5 km (Prosek-Bancarevo 9.4 km, Bancarevo tunnel around 700 m, Bancarevo-Crvena Reka 12.4 km).

From December 1, there will be no toll on this highway.

The construction of the road was a great challenge for the workers, and the opening of the section is significant as it will enable drivers to bypass the Sicevo Gorge.

The section features 87 bridges, the longest of which is bridge number 13 on the Crvena Reka-Ciflik section, which crosses the Nisava river and is 475 meters long. There are also five modern tunnels and five interchanges. Around 780,000 tons of asphalt was poured into the entire eastern leg of the corridor, Blic reports.

The total value of the construction of the eastern leg is estimated at around EUR 476 million.

– In a few months, Bulgaria will complete the final 12 kilometers toward Sofia – Vucic said, as reported by RTS.

Borisov said that the opening of the eastern leg of Corridor 10 marked the connecting of the Western and the Eastern Europe.