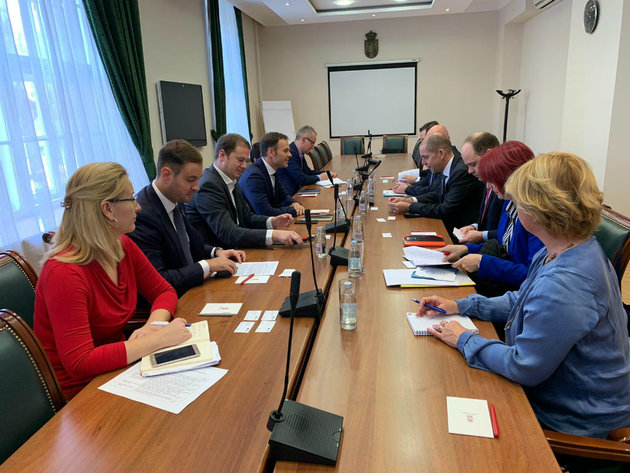 (Photo: Ministarstvo finansija)
The German foundation Konrad Adenauer Stiftung has officially opened a new office in Belgrade, and its programs are formulated as support to the strengthening of the political and any other kind of cooperation between Germany and the country in which the foundation operates and has a seat. Serbian Finance Minister Sinisa Mali met with representatives of Konrad Adenauer Stiftung, led by Deputy Secretary General Gerhard Wahlers.

Considering that Wahlers takes part in formulating the foundation's programs worldwide, including Serbia, he pointed out that education and investments were two very important areas.

Mali introduced Wahlers to the details of the funds set aside for innovations in the budget for 2020, as well as the government's further plans for inciting innovations in Serbia.

– Through the Innovation Fund and the Science Fund, we have set aside substantial funds for innovations in the budget for 2020 – Mali said and added that the Government of Serbia knew very well that the future economic development of countries in the world relied more and more on innovations and modern technologies.

Mali emphasized that plenty of efforts were being made to facilitate doing business in Serbia and reminded that, in 2018, the state had started working on tax exemptions stimulating innovations.

The minister informed the representatives of Konrad Adenauer Stiftung about the macroeconomic results, emphasizing that the Financial Times had pronounced Serbia the country with the most direct foreign greenfield investments in 2018. He added that, in the first seven months of 2019, Serbia had attracted 43% more direct investments than in the same period in 2018.