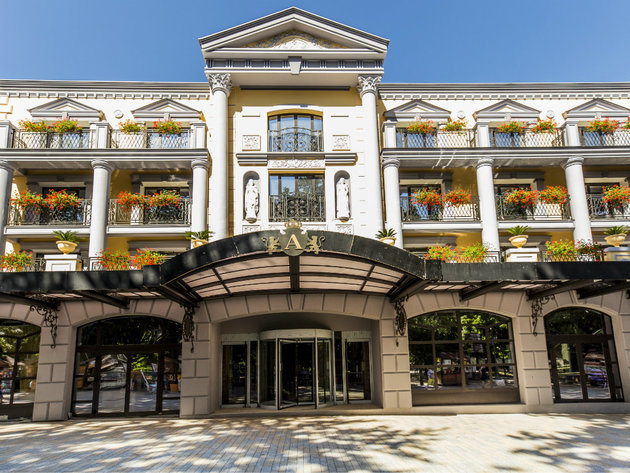 Vrnjacka Banja will soon get another luxury tourist facility, namely, Hotel Park, the reconstruction of which is in progress, and which belongs to the Serbian chain A Hoteli, which also features hotels Izvor in Arandjelovac, Grand Tornik on Zlatibor, Sloboda in Sabac and Garni Hotel Master in Novi Sad.

– Hotel Park is located on the main promenade in the center of Vrnjacka Banja and is already attractive to tourists and visitors. The renovation of the facility entails the expansion of the hotel's features and accommodation capacities, as well as a change of the exterior. The facade has been redesigned to fit the traditional forms of the academic style, and the sculptures of queens Maria and Aleksandra Karadjordjevic, positioned in alcoves, are a special attraction. We are intensively working on the interior, so the works are close to completion – says Vesna Vlatkovic, the PR and marketing manager of A Hoteli Group.

As our interviewee says, after the reconstruction, the hotel will have numerous other features in addition to accommodation units.

– Hotel Park will have a lobby bar, a restaurant with a patisserie, an accommodation restaurant, a spa center, a meeting room, a conference room and its own parking lot. The spa center, which is built in line with the high global standards and in the recognizable attractive style of A Hoteli, will feature a pool, a sauna, a salt room, a relaxation room with tepidariums and a massage and treatment area – Vlatkovic points out.

The Belgrade-based design studio Nas Stan was in charge of the preparation of the project of Hotel Park, and some of the companies which worked on the equipping and the construction of the hotel are Amiga, Atlas and Oganj.

– The renovated Hotel Park will have 67 modern accommodation units of various structures and areas. We can already say that this hotel, the investment in which was worth around EUR 9 million, will help raise the standards of accommodation capacities in the most visited spa in Serbia. The plan is for it to have five stars – eKapija's interviewee says.

As she points out, all the employees are eagerly awaiting May 1, 2020, when the Hotel Park is scheduled to open and welcome its first guests.

As Vesna says, the investments of Alco Group do not end here.