Old Sava Bridge to end up on land after all? 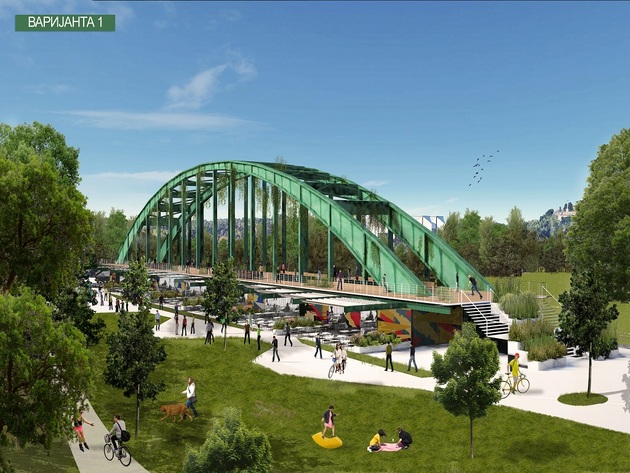 (Photo: Beograd.rs)
The survey on the Old Sava bridge is still up on the site of the City of Belgrade, and the city's main urban planner, Marko Stojcic, said that the option of having the bridge's arc moved to the Usce Park, with commercial and tourist features located below it, had received the majority of the votes.

Marko Stojcic said on RTS that the option entailed the construction of a new pedestrian-cycling bridge from Block 70a to Ada Ciganlija, whereas the other option meant moving the bridge to another location.

Citizens can vote for one of the two options at this link.

– Around 3,500 people are in favor of the first options, and around 2,500 people are for moving the bridge. The construction of a new bridge starts in the spring. The idea is to keep the old bridge to the maximum extent, due to the necessity of this traffic connection. We expect it to start being disassembled in late 2020 and for the route to be closed for road and other traffic for only a few months – Stojcic said.

– Those 17% do not pertain to the traffic over the bridge, but to the traffic that will go through the tunnel in the future. This is the key thing related to the bridge, as well as the roundabout on the New Belgrade side, whose purpose is to direct the traffic away from Branko's Bridge to the future Sava Bridge, which will have four traffic lanes, two bicycle lanes and two pedestrian lanes. It is extended into the tunnel near the Faculty of Economics, with the exit in the Despota Stefana Blvd. Seventeen percent of the cars will pass through that tunnel – Stojcic said.

According to him, less than 10% of the traffic passes through the bridge today.

As soon as the survey is completed, citizens will be able to vote on the linear park – the territory between Beton Hala and the Pancevo Bridge.