Lebane to get tourist complex modeled after those in Austria and Slovenia – Bungalows, glamping areas, adventure parks, sports fields and other features to be built 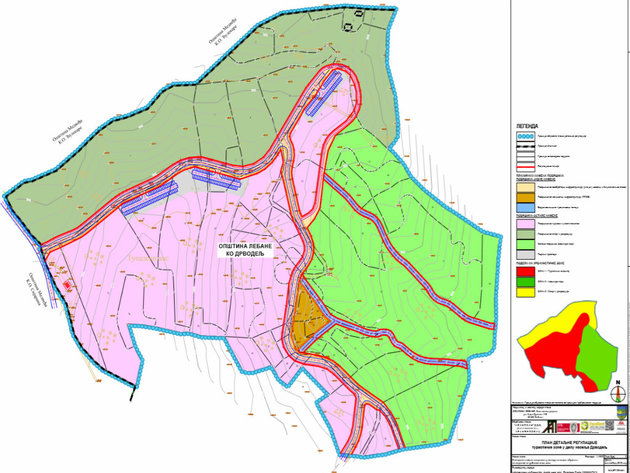 (Photo: Arhiplan)
In a part of the Drvodelj settlement in the municipality of Lebane, the plan is to build a tourist zone which will entail the construction of bungalows and other tourist facilities, an adventure park, sports and recreation fields and bicycle routes.

The public review of the Detailed Regulation Plan of the future tourist zone is currently in progress, and a public session has been scheduled for November 1 at the premises of the Municipality of Lebane, where interested parties which have filed complaints and suggestion will be able to explain them in front of the municipal Planning Commission.

As the documentation says, the local self-government aims to put this area in the function of the development of tourism, which will influence the economic development of this part of the country as well. The area in Drvodelj has 27.13 hectares and currently consists primarily of agricultural and forest areas. As said, the area features one uncategorized road and has no water supply or sewerage systems. It also lacks electrical energy infrastructure.

The DRP, prepared by Arhiplan d.o.o. from Arandjelovac, divides this area into three zones.

The first one, where tourist accommodation capacities are to be built on an area of 11.47 hectares, should feature a central restaurant and the reception area of the tourist complex, a central point with a small café and local product/gift shops, as well as several groups of bungalows. These should be built using natural materials, and the area should be developed to accommodate a camping and glamping settlement.

The second zone should feature the adventure park on 8.83 hectares, as well as sports and entertainment grounds for various user groups, featuring content for children and adults.

As for the infrastructure, the plan also envisages the construction of water supply, sewerage and electric energy infrastructure, streets, parking lots and bicycle routes.

As Dragana Biga, the person responsible for the DRP and the director of Arhiplan, told eKapija, the plan is modeled after similar tourist complexes in Slovenia and Austria.

– The idea was to preserve nature within the future tourist zone, while also enabling tourists to come in contact with the nature here, which is why the plan includes bungalows, camping areas and construction based on natural materials – Biga said.

According to Tanja Bogdanovic, the head of the municipal administration of Lebane, the funds for the construction of the Drvodelj tourist zone will be included in the municipal budget for 2020, a draft of which is expected to be prepared by the end of the month.

After that, we expect public procurement procedures to open next year and the project realization to follow – Tanja Bogdanovic announced for our portal.