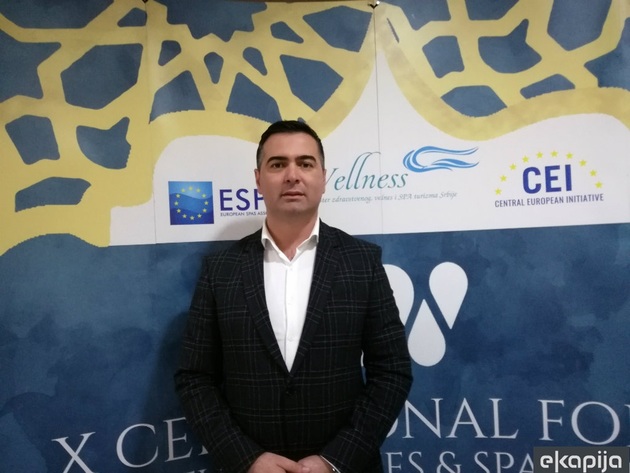 Boban Djurovic, president of the municipality of Vrnjacka Banja (Photo: Dragana Obradović)
Vrnjacka Banja is a destination that is developing intensively and one of the most important carriers of not just the spa tourism, but the Serbian tourism in general. In 2018 alone, which also marked 150 years of active tourism, there were over a million overnight stays. In the first nine months of 2019, Vrnjacka Banja had 700,000 overnight stays, putting it right behind Belgrade.

– That's not our final reach. In the 1980s, there would be up to two million overnight stays, and Vrnjacka Banja had more overnight stays than Belgrade, Dubrovnik and Bled combined. The breakup of Yugoslavia has left its consequences, but Vrnjacka Banja has been returning to its old glory in the past few years – said the president of the municipality of Vrnjacka Banja, Boban Djurovic, also one of the participants in the Regional Forum of Health, Wellness and Spa Tourism in Belgrade.

– We expect another three hotels to open next year. Above all, there's Vrnjacke Terme, with a complex of indoor pools. There's also Zepter's hotel. This is a building which will have a shopping center on the ground floor, a medical unit and hotel rooms and apartments on six floors. Another important investment is Hotel Park, which is being completed by Alco Group. It will be located in the city center, have five start and is expected to open in the first half of 2020 – Djurovic told eKapija.

When it comes to investments, the president of the municipality of Vrnjacka Banja also emphasizes the importance of the accompanying features which are important for every tourist destination.

– In addition to wellness, health and spa tourism, we also want to offer our guests other features so that they would stay here as long as possible. That is why we've opened several attractions, such as the waterfall, the new pedestrian zone, parks, the Japanese garden and a large aqua park, which is just being completed and thanks to which we will be the only place able to match similar facilities in Hungary and Slovenia. Also, there are numerous attractions on the Goc mountain, with a ski resort that is involved in the whole project and which will certainly make the offer more complete. With these activities, we are trying to animate our guests so that they would stay in Vrnjacka Banja for five, six or seven days on average, instead of the current average of three days. All this will lead to an increase in the number of overnight stays, increased consumption by guests and with that the income realized by the local self-government – said Boban Djurovic.

Djurovic sees natural sites as the advantage that Vrnjacka Banja has a tourist destination, primarily its thermal water springs. There are seven such springs at the spa and they have all been made to work for tourism and investments. The position between the West Morava river on one side and the Goc mountain on the other has also resulted in the municipality's interest in having a gondola built that would connect the spa with the mountain.

– This would be a panoramic gondola which would operate 365 days a year. The project is already prepared and we are currently in talks with Chinese companies and the Government of Serbia. This is a large investment, but the project will be cost-effective. There are already interested investors, but everything is still in the negotiation phase. Once this is completed, we will open a public invitation – Djurovic emphasized.

Another piece of news regarding Vrnjacka Banja is its independent penetration of the Asian market, primarily China and India.

– This has resulted in us having a large number of tourists from those two countries, but also a large investment, namely, the first Indian hotel, which will be built under the Marriott brand. The investment has been initiated in the form of a project, on paper, but also as a construction project. The company in question is active in the field of education. It has over 600,000 students in India. They were a part of a student program in Vrnjacka Banja, where various groups held their activities for 14 days. One part of the hotel will be built for that purpose, whereas the other one will be built for other guests and students' parents – Djurovic said.

Numerous infrastructure projects are also of great importance for the development of tourism in Vrnjacka Banja. One of them is the construction of the Morava Corridor, which will shorten the travel time between Belgrade and Vrnjacka Banja to slightly over an hour.

– I would also like to emphasize the importance of the opening of the Morava Airport in Kraljevo, which is 15-20 minutes away from Vrnjacka Banja. The first connections with Vienna and Thessaloniki have already been established, and we expect several other European cities to be included as well. This will also considerably help increase the number of visits to Vrnjacka Banja, but also to Kopaonik – Boban Djurovic emphasized.