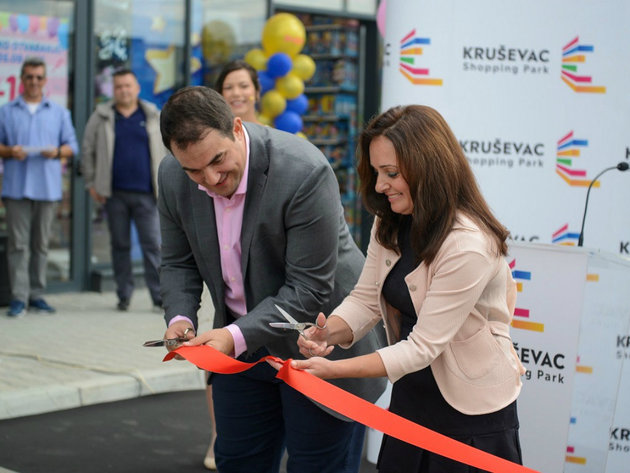 The ribbon-cutting ceremony
Krusevac Shopping Park officially opened today in the presence of numerous citizens of Krusevac and the surrounding area.

The facility, in whose construction the investor, NEPI Rockcastle, invested EUR 12 million, is the first modern shopping park in the town on the Rasina, with around 9,000 m2, over 300 parking spaces, 17 outlets of famous local and international brands and a café.

Nemanja Savcic of NEPI Rockcastle Group stated that he hoped that Krusevac Shopping Park would become the shopping center in this region, but also a meeting spot.

– We tried to bring the best and the most popular brands to Krusevac – Savcic said and emphasized that some of those were new to the market.

Jasmina Palurovic, the mayor of Krusevac, emphasized that Krusevac Shopping Park has helped create 250 new jobs in the town.

– This kind of a shopping park is something that the city needed, a good place for socializing and going out – the mayor emphasized and added that the part of the town where the facility is located was slowly expanding, becoming another center of Krusevac.

As Nemanja Savcic told eKapija, the opening of such shopping centers means a lot for the local economy.

– On a microlevel, it’s important it terms of employment, the economy, taxes and other fees, the development of tourism and the real estate market – Savcic said and thanked the contractor, the Krusevac-based company Tehnogradnja.

He said that there was a possibility of expanding the Krusevac shopping center in the future, emphasizing that there were more interested renters.

Savcic told our portal that NEPI Rockcastle Group also planned to expand in Serbia, but also outside it, adding that no deadline had been set, but that new projects were being worked on.