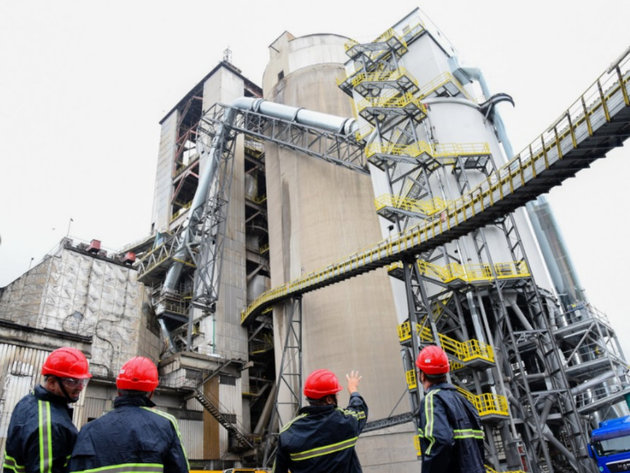 The commissioning of the new technological line (Photo: Pokrajinska vlada)
The new technological line, an investment worth EUR 7.2 million, has been commissioned at the Lafarge cement factory in Beocin, and the president of the Provincial Government, Igor Mirovic, has given the company the Integrated Permit for all facilities based on the Law on Prevention and Control of Environmental Pollution.

Today, Lafarge also celebrates its 180th anniversary. It is a member of the world giant LafargeHolcim Group, which has 2,500 facilities in 80 countries, employing 75,000 people.

Congratulating the company, Mirovic said that the opening of the new technological line also meant a step forward in increasing the share of renewable energy in the production of cement and a better protection and preservation of the environment, it is said on the website of the Provincial Government.

– Since Lafarge took over this factory, the emission of poisonous gas has been reduced by 25%, which is of great importance for Fruska Gora, but also for the overall development of our most important economic potentials – the development of agriculture and the production of healthy food – Mirovic said.

– The new technological line Choric Bypass will upgrade the process of the production of clinkers, and the result will be a reduction of the emission of carbon-dioxide by over 20,000 tons annually – said Dimitrije Knjeginjic, the director of Lafarge Serbia.

The history of the oldest cement factory in the Balkans begins in 1839. Over nearly two centuries, the materials produced in Beocin have been used in the construction of some of the most important structures in Serbia, such as the Djerdap Hydro Power Plant, the Avala Tower, Sava Centar and many others.