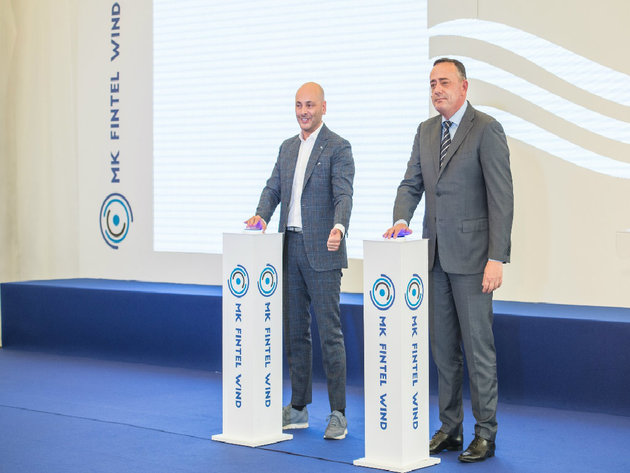 Tiziano Giovannetti and Aleksandar Antic
The Kosava 1 Wind Farm, the third and the largest wind farm of MK Fintel Wind in Serbia, after the Kula Wind Farm and La Piccolina Wind Farm near Vrsac, officially opened in Izbiste near Vrsac today.

With a total power of 69 MW and 20 wind generators, Kosava 1, which started working two years ago, will supply 45,000 households, and the investment is worth EUR 118 million.

As Tiziano Giovannetti, the company’s CEO, pointed out, the second phase of the project, Kosava 2, has started as well. This phase entails the construction of another 15 wind turbines.

According to him, RES projects are not just important in the context of fighting climate change, but for the economy as well, as they bring large investments and hundreds of new jobs.

Giovannetti said that feed-in tariffs had made the construction of Kosava 1 possible and pointed out that the company’s future projects would no longer need any incentives.

He also announced the construction of another wind farm in Serbia, the largest one in Europe, near Sombor.

According to the Minister of Mining and Energy of Serbia, Aleksandar Antic, the new project will begin in 2 to 3 years, have 600 MW of installed power and be competitive with gas and coal power plants. It will be connected to the network in 5 to 6 years.

He emphasized that Serbia was the absolute leader in the region in 2018 and 2019 when it comes to wind energy projects.

– Each week we open a wind farm. Last week, we opened the wind farm in Kovacica, this week we opened the one in Vrsac, and we will open Cibuk as well very soon – Antic said and added that each such project was a technological step forward for Serbia.

Italian Ambassador to Serbia, Carlo Lo Cascio, stated that the joint venture of the Italian and the Serbian company was an excellent example of economic cooperation and reminded that the trade between the two countries amounted to EUR 4 billion and that 600 Italian companies operated in Serbia. He added that Italy would continue investing in Serbia.

New system to be auction-based

Minister Antic announced that wind and solar energy projects would be able to develop in market conditions, without feed-in tariffs or any form of support, from 2024 at the latest.

– We will not be increasing the amount of wind and solar energy from feed-in tariffs. Instead, we are working on a new, auction-based, system – Antic said.