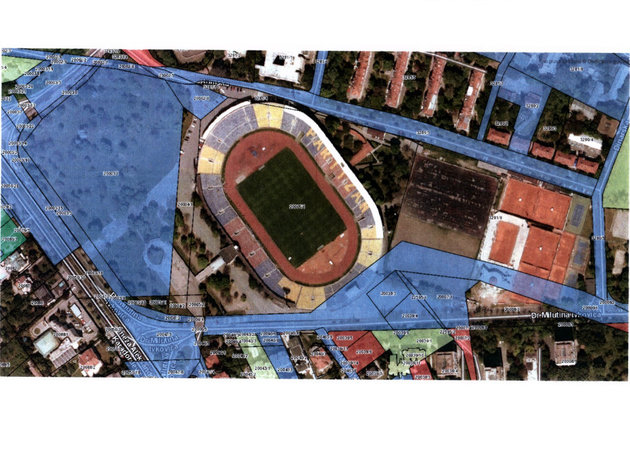 (Photo: Printscreen)
The Secretariat for Urban Planning and Construction has put the Detailed Regulation Plan of the Partizan sports complex up for early public review at the City Administration of Belgrade on work days between 9 am and 6 pm until October 7, 2019. The study was also uploaded to the website of the City of Belgrade. As said in the document, the draft authority is the Center for the Planning of Urban Development – CEP.

According to the current general regulation plan, the territory is meant for areas for sports facilities and complexes – tournament sports complexes. The general objective of the preparation of the plan is for all the necessary requirements which will enable the realization of the spatial and functional needs in the complex to be realized through looking into the spatial potentials, all to the end of securing the optimal conditions for the development of sports and the modernization of JSD Partizan.

The special objectives of the preparation of the Detailed Regulation Plan, as cited, are the creation of planning possibilities for reconstruction or construction of new features, providing the capacities of technical infrastructure for the planned construction, preservation and improvement of the environmental conditions, as well as the implementation of a sustainable and ecologically stable system.

In the football stadium spatial whole, the largest part of the complex, the plan is to build a new stadium or rebuild the current one, with the planned capacity of up to 35,000 spectators, as well as to build all the accompanying features (management facilities, toilets, locker rooms, prop storage, rooms for preparation and other facilities), commercial features (commerce, hospitality, business, entertainment, culture etc.) and to build a hotel.

In the indoor sports courts spatial whole, along Dinarska Street, in addition to indoor sports halls, the plan is to build adjacent facilities (locker rooms, gyms, fitness centers etc.), as well as commercial facilities (business, commerce etc.) and business apartments primarily meant for the accommodation of athletes, visitors and guests of the club.

Construction of underground garages is planned within the complex as well. Aside from garages, parking should be available at outdoor parking lots, within the parcels with adequate spatial characteristics. The planned garages will be accessible from Humska, Dr Milutina Ivkovica and Dinarska streets.

Pedestrian areas along all the primary and secondary traffic routes, with the minimum width of 3 meters, are planned as well.

According to the plan and the guidelines for the development of a public transport system within the plan, that is, in the streets covered by the plan, no new public transport lines are planned, which means that the area in question will still be serviced by the existing lines.