Wind farm of 104.5 MW opened at ceremony in Kovacica – Investment worth EUR 189 million 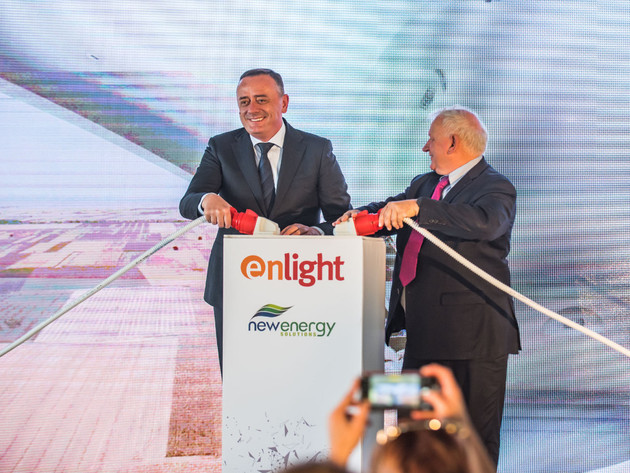 Aleksandar Antic and Yair Seroussi
The Kovacica wind farm, the first fully new power plant to be connected to Serbia’s power distribution network after nearly three decades, officially opened today in the presence of the Minister of Energy and Mining of Serbia, Aleksandar Antic, the Israeli Ambassador to Serbia, Alona Fisher-Kamm, and representatives of the investor, the Israeli company Enlight, and the Serbian partner, New Energy Solutions.

This power plant, which has been operational since July 2019, has 38 installed wind generators, with a total power of 104.5 MW. It will produce energy for more than 68,000 households, thereby helping reduce CO2 emissions by around 250,000 tons a year.

For the needs of the construction and the operations of this wind farm, the investor built and reconstructed over 40 km of roads, and the total value of the investment in the Kovacica wind farm is EUR 189 million. The EBRD provided a loan of EUR 49 million, whereas the other financiers are Erste Group and Erste Bank Serbia.

On this occasion, minister Antic pointed out that one of the priorities of the Government of Serbia in the energy sector was to use clean energy, aiming to have 27% of the power produced from RES by 2020 and installing a total of 500 MW from wind power.

– Serbia has around 400 MW of installed power from wind energy and they produce 3-4% of our total energy on an annual level. Serbia is very dedicated to renewable energy and our plans remain ambitious – he said and added that, in addition to private investments in this field, there will also be investments by EPS.

The development of the Kovacica Wind Farm project began in 2012, when New Energy Solutions, which developed the project and which will run the wind farm, chose the location.

A representative of New Energy Solutions, Milos Colic, told eKapija that the wind farm, whose construction started in 2017, officially opened today, whereas its operations had started in July 2019.

– The Kovacica Wind Farm has been operational since July 12, 2019, when we obtained all the necessary permits. Since then, the facility has had the status of a preferred producer. Today, we have gathered to celebrate the completion of this project after seven years of work, as a token of gratitude to everyone who took part in it – Colic said and added that New Energy Solutions was working on researching new locations suitable for RES.

Yair Seroussi, the president of Enlight Renewable Energies, pointed out that Enlight was a fast growing Israeli company which operated in ten European markets.

– We believe that we have a strong partnership in Serbia and that we will continue developing several projects in the region with a group of professionals, financiers and contractors and with our excellent local partners. In the era of climate crises, clean energy is something we need to develop further – he said.

This Israeli company, as Maayan Sarig, the company’s manager for global projects and development, said, wants to be present in the region in the long term and it is therefore already preparing new projects in the field of RES.

– We are very happy that this project has been completed successfully, and we are already developing a new one, also in Kovacica. We are currently waiting for the regulations in Serbia regarding RES to be finished and we are looking forward to continuing working in Serbia – Sarig said.

Alona Fisher-Kamm, Israeli Ambassador in Serbia, pointed out that Kovacica was the first and the most important Israeli investment in the energy sector in Serbia and that it contributed to the green energy goals of Serbia and the quality of life, considering that more people die from the consequences of pollution than in traffic accidents.

– Reducing the dependence on imported fuels contributes to the energy independence of any state. For Israel, it is of key importance, as it is not on the networks as an energy island. I hope that the success of Enlight will attract more clean technology investments from Israel, along with a further expansion of Enlight in these areas – she said.

Serbia currently has five active wind farms, and another wind farm should open in October, as announced.

Let us remind that this is the first fully new power plant to be connected to the network of Serbia, after Pirot and Kostolac in 1990 and 1991.