This is what the new 8,244-seat stadium in Leskovac will look like 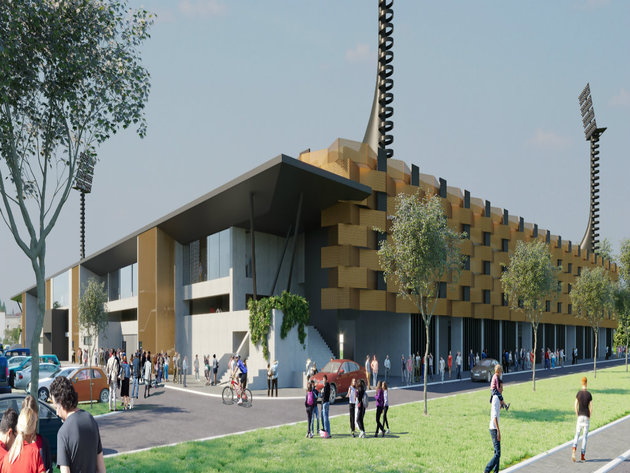 Future look of the stadium (Photo: JP Urbanizam i izgradnja Leskovac)
The project of the reconstruction and the construction of stadiums in Serbia will include the construction of a stadium in Leskovac, which should comply with the 2018 UEFA Stadium Infrastructure Regulations, and the works should begin in April 2020. Leskovac, once known as the Serbian Manchester, should thereby get a stadium which resembles the ones in Britain.

– The Detailed Regulation Plan of the Dubocica stadium complex needed to be prepared first. The plan was prepared parallel with the preparation of the preliminary design of the facility, through cooperation of the urban planners from the PE Urbanizam i izgradnja from Leskovac with the designers hired to prepare the preliminary design. With the preparation of the planning solution, conditions have met for the planning development and the upgrade of the sports and recreation zone. The plan was adopted in June 2019 and is a basis for the issuing of location requirements and a building permit – Novica Nikolic, the director of the PE Urbanizam i izgradnja Leskovac, says for eKapija.

Location requirements were obtained in cooperation with representatives of the Office for Public Investments and a representative of the UNDP, and the project for the construction permit is currently being prepared.

– The current stadium has insufficient infrastructure, and the accompanying features are dilapidated. The stadium has no scoreboards or floodlights, and the complex is not adequately fenced off. Beneath the western stand are locker rooms and toilets for both teams and referees and they are in a very bad condition. The accompanying structures are ground-level and of poor site class – Nikolic says.

The new stadium will have a minimum capacity of 8,000 spectators. The preliminary design envisages 8,244. The field will be 68 meters wide and 105 meters long.

– The stands will surround the field on all four sides. The western stand has three levels. The first level, beneath the stand, will feature structures related to the club’s needs: independent bus access for both teams, locker and warm-up rooms, rooms for referees and delegates, a spacious hall, the central entrance for VIP guests and the press, a press conference hall, a first aid and doping control, and a room for the storage of the equipment necessary for the functioning of the stadium. The second level features entrances to the stands, which are reachable through seven passages. The third level features the premises for the club’s administration, the press, TV reports, a TV studio, control room and a VIP café. Two elevators will be installed as well – Nikolic says. 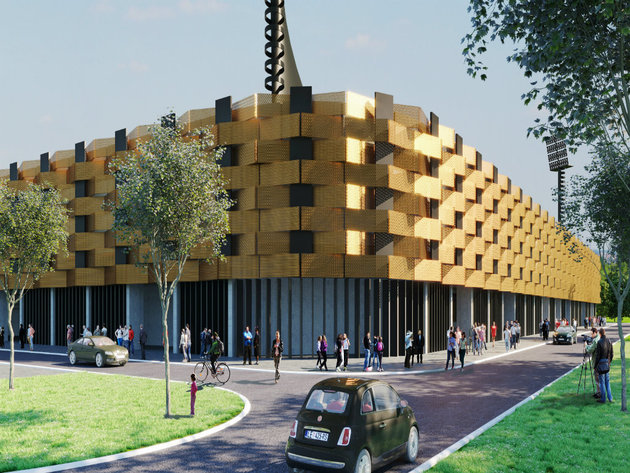 From the east, the south and the north, visitors will reach the corridor beneath the stand through controlled entrances. Along the corridor will be catering and first aid points and toilets. Independent entrances to the stands for persons with special needs are included in the design as well, on the southeast and the northeast side.

– The stands are compact and flat. In the corners, at a 45 degree angle, there will be two scoreboards and two ad panels each. The lighting should be provided by LED floodlights, on four columns located along the diagonals. The complex will be fenced off and feature controlled access – there will be 4 entrances to the complex – Nikolic says.

The stadium will have more than 150 parking spaces.

Power supply will be secured with the building of a new substation. A diesel power generator should be installed as well.

The total area of the land under the facility is over 8,000 m2, the facility will have three levels and be 16 meters tall.

Let us remind that new stadiums are also to be built in Zajecar, Loznica, Vranje, Kraljevo, Subotica and Novi Sad.