New rule for drivers from January 1, 2020 – License plates older than 9 years to be replaced 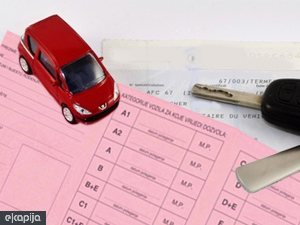 All vehicle license plates older than 9 years will have to be replaced, which in turn requires new driver`s license and new registration sticker. Mandatory replacement of old license plates is an additional cost for drivers that they would have to pay for starting next year.

Namely, according to the Rulebook on registration all driver`s that had their plates issued before 2011, will have to pay around RSD 4,000 for new license plates, starting January 1, 2020. Having in mind that last year Serbia documented around two million registered vehicles, now the total cost of replacing the old plates, previously valid until the driver replaced their driver`s license, amounts to RSD 7.88 billion.

Many consider the reason for limiting the validity of the plates problematic. The previous rulebook proscribed their validity to seven years which is the expiration date of the protective film they`re covered with, even though made according to the latest technological standards of The Institute for Manufacturing Banknotes and Coins . The validity of the plates was extended thanks to the amendments to the Rulebook in 2017, hence the new expense will have to wait until next year.

Milan Vujanic, the professor at the Faculty of Transport and Traffic Engineering thinks that there is no need to replace the license plates every nine years.

– Before we had the plates with unlimited validity. Though that has changed because all plates must now be uniform have the same size, color and the like. Also, I can`t accept the reason for the change being the alphabet letters “č”, “š”, “đ” and “ć” , because if they can be present in the first part so they can be in the second part of the plate. As they extended the expiration time to nine years they can extend it to 11 and so on. Who can guarantee to the drivers they were just manufactured and didn`t just lie around some storage, Vujanic said.

This is yet another conundrum that will yank the money out from drivers and it will follow just six months after the previous regulation stating that drivers wouldn`t be able to register their vehicle unless the engine and chassis numbers are clearly visible.

Drivers who had license plates containing the letters “č, š, đ, ć, ž, w i y “ had trouble with their plates too due to numerous issues with plates containing letters with diacritical marks, which were then scrapped in July 2017.

However, the drivers were permitted to continue using the plates containing the letters until their registration expired.