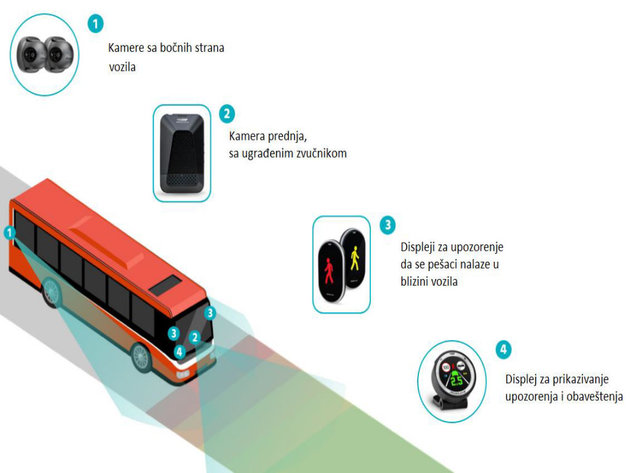 The City of Zajecar has started realizing the project called “Real time notification system for traffic accident reduction in Zajecar” which is worth RSD 25 million. The project is realized within the “Smart cities” programme of the Ministry of Innovation and Technological development.

The project concerns avoiding car crashes and reducing injuries and fatalities in traffic, and it foresees the installation of the system in 45 official vehicles of the local government, public utility enterprises and other public services as well as in 15 public transport buses.

--The investor can upgrade the system at a later time and increase the number of vehicles planned for expanding the system, the City Administration told eKapija.

The system consists of two parts – The unit for the front windshield containing a camera, EieKu chip and a speaker for sound warnings and display for visual warnings which is installed either on the dashboard or on the windshield.

--The camera scans the route and determines through specific algorithms the presence of other vehicles on the road, road signs. traffic signs, speed limits and traffic participants at risk such as pedestrians and cyclists. When the systems detects a situation that can potentially cause an accident, it informs the driver with visual and sound warning. In that way, the driver is given extra time to brake or slow down in order to avoid crashing, states the project presentation.

The project asserts that the goal is to maximize the level of road safety and minimize the number of traffic accidents.

– Furthermore, one very important quality of the system is that the camera contains a data card that transfers the data to the main server. The server stores the data and analyzes the sections of the road with the highest warning frequency. You could say that the system “remembers” and “learns” from particular situations so when the next time a vehicle approaches a critical section on the road it will receive a notification so the driver is promptly informed to pay attention on that section, the City Administration project presentation states.

The Ministry of Innovation and Technological Development has supported eight municipalities through financing the project realization within the “smart cities” programme with the total of RSD 206 million.