Tales from Peristeron boat – "Danube is freedom" and fairytale of Golubac 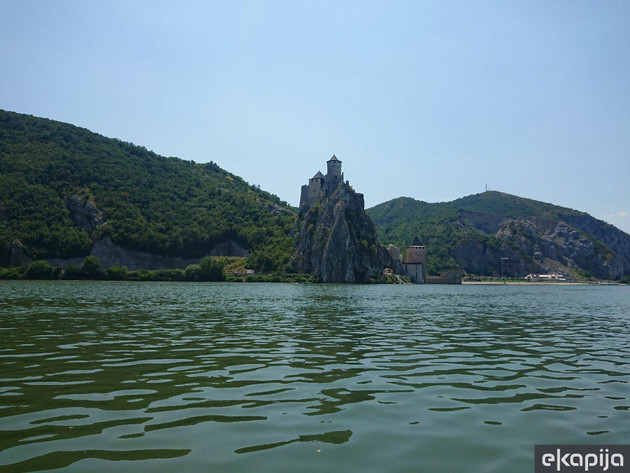 Unconquered Fortress (Photo: Aleksandra Kekić)
If you`re still wondering why they call the Danube River the “sea”, you haven`t yet seen Golubac! This village located in eastern Serbia is graced with the beauty of the river, whose width at this point reaches 6,100 m. This is the river most popular in the world for river cruises, a fact which Jovan Kocmanovic, a historian and tourist guide, also recognized.

He had been living in Belgrade suburban settlement Sremcica until he finished his studies while his summer breaks were spent with his cousins in Golubac.

– Danube is freedom! I felt like living in a cage or in a box in Sremcica. That place is filled with buildings. corners and streets that connect them. I saw that the city without a river is pointless and unfulfilled. You have a certain sense of true freedom in Golubac, a sense of breadth and width. For me that feeling is unique and magnificent. You can swim and fish and breathe in a scene close to those in fairytales here. The setting gives you space to live out your own fairytale, Jovan says.

It genuinely feels like that here. As you approach the famous fortress, the view of the Danube reminds one of the view of Bay of Kotor. The blue of the Danube, its width and the impression that it merges with the horizon in the distance are incredible. The spirit of the sea indeed.

Your experience of the place will be enriched by a tour on the Peristeron boat that will take your through Golubac gorge which lies at the beginning of the Djerdap gorge (also called “Iron Gates”) all the way to Jelenska Stena quarry. For centuries local tales tell the story of a wounded deer who threw itself of that cliff so it could never be defeated.

The legend imbues the Golubac area and especially the Golubac fortress. Its location is such that it never allowed to be conquered. Newly-renewed fortress attracts many tourists who learn about its history, made by, among others, Serbian despot Stefan Lazarevic and one of the greatest Polish Medieval heroes, Zawisza the Black.

– The alcove you see in that cliff across is the place where a dragon St. George wounded with his lance hid. It died in here, but later on, Golubac flies started swarming there and continued its legacy - pestering the townsfolk and attacking its livestock, Jovan tells another local tale that tries to account for appearance of these insects which disappeared after the construction of Djerdap I Hydroelectric Power Station but appeared once more after the 1999 NATO bombing. 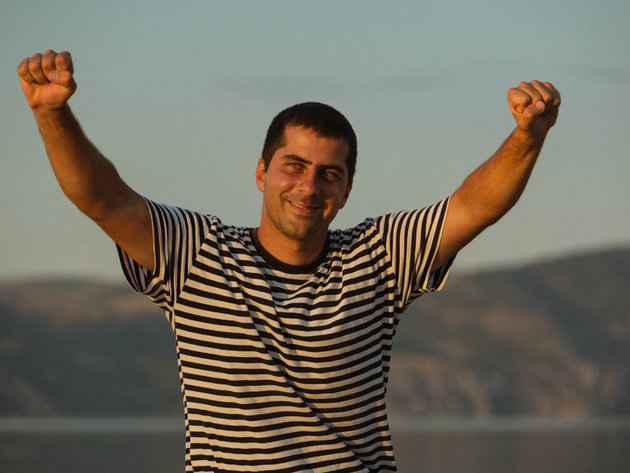 Jovan Kocmanovic
While cruising the river Jovan will tell you another story about a beautiful princess and her tragic love and the Baba Kai rock she was tied to.

– Another tale says that Golubac got its name after pigeons (golub – pigeon) that were the only company to a princess trapped at the top of the castle in what is today known as the Hat Tower. Jovan relates the tale to curious tourists while the boat`s captain, his uncle, navigates it deftly so that the visitors could see and photograph the fortress from all angles.

The tourists from Europe as well as from other continents have felt the wind blowing through the hair and the sunshine on their skin while they cruised on the Danube without a care in the world. Jovan says that he got the proof he was doing the right thing when he saw a broad smile on a Russian tourist when they sailed into Djerdap gorge, after her day had started on a wrong foot.

This is the reason he decided to stay in Golubac which is the place he considers the best and most beautiful in Serbia. He wants to contribute to its development, promotion and improvement through his own work. He says he was inspired to do so by an Israeli tourist who came to visit Golubac with his family.

– He asked me why was the promenade empty and where all the tourists were. His question took me by surprise and I didn`t know what to say. I told him the Government invests very little in the countryside and that was the main reason. The Israeli man was taken aback by my response and then he said something which completely changed the way I thought about Golubac, the boat tours and business in general. He said “Why in the world do you need the Government? What has the Government got to do with the fact that there are no tourists around here? The Government is there to build roads and provide education and not to help you bring the tourists in. You have to do that yourselves.” What he said echoes in my mind every time I think about work, Jovan reveals.

Since that day he no longer waits for the tourists to come, he seeks them out and thinks the same should be with other Golubac folks. He is of opinion that this place, which could become a symbol for vacation, leisure, relaxation and recreation, isn`t using up even 5% of its potential.

– Golubac doesn’t have a beach or a developed bathing resort and we all admire Golubac because of the Danube. Also, Golubac doesn`t have a docking station, while ships pass and sail around it every day. On the other hand, we who live in Golubac have to become aware of its appeal and to respect it and love it and develop it more, and in that way, grow with it. We have to realize we are living in a potential future Dubrovnik on the Danube and create that Dubrovnik with our sweat and imagination, Jovan states. 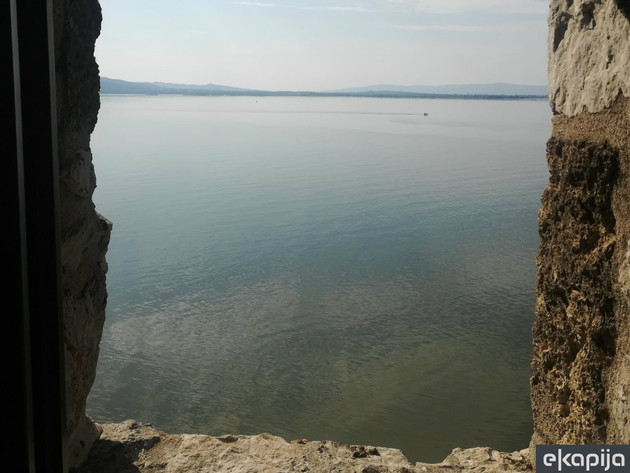 The view of Danube from the fortress (Photo: Aleksandra Kekić)
He is on the right course, which the Serbian Chamber of Commerce already confirmed by nominating Periston for the Best of Serbia Award. How the project “Golubac from the boat” fared in the competition will be known in September.

Aside from the boat ride, Jovan with take you trekking, hiking or offer you fish specials and fine wine with the same smile and enthusiasm. You can season all that with honey from black locust forests overlooking the Danube. However, one tour needs a special mention.

– The bicycle tour is very close to my heart. Especially because it leads to one of the greatest shrines in eastern Serbia, Tumane Monastery. It is a holy place wherein a person feels special. I feel the spirit of ancient knighthood there every time. It is a place that guards legendary Serbian knight Milos Obilic, that guards our medieval legacy. Trekking tour through forests around Golubac is also pretty nice but that builder knight from Tumane is why the bike tour is my favorite, Jovan points out.