This is what UEFA-ready stadium in Loznica will look like – Two courts and capacity of 5,000 spectators 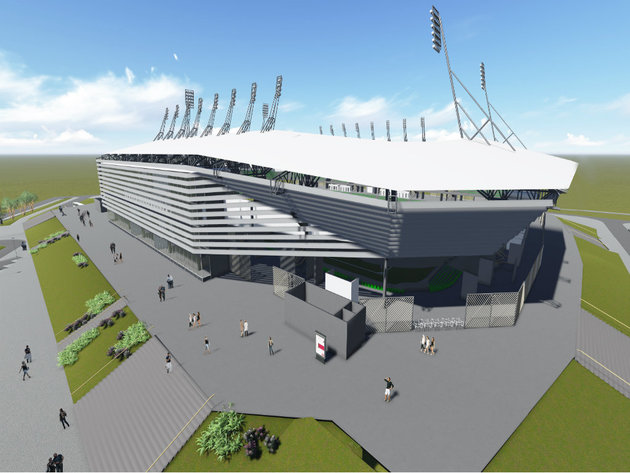 The future look of the stadium in Loznica
According to the project of reconstruction and construction of stadiums in Serbia, Loznica should also get a new stadium that will meet the UEFA standards.

The director of the Property Directorate of the Republic of Serbia, Jovan Vorkapic, and the mayor of Loznica, Vidoje Petrovic, signed agreements on the transfer of public ownership rights from the Republic of Serbia to the City of Loznica, to the end of having a stadium built that would meet UEFA 4 standards in the Lagator location. At the request of the ordering party and the investor, the City Administration of Loznica, an urban project was prepared for the construction of the football stadium in Loznica, the City Administration told eKapija.

The plan is for the complex to feature seven facilities, namely, a facility for FC Loznica, with the western stands, an entrance/exit tunnel for players, an auxiliary facility, eastern stands, two ticket booths and a kiosk.

Next to the main facilities are the western stands. The eastern stands are set up along the eastern side of the main football field and can be accessed from Maksima Gorkog Street. The two stands have a capacity of 5,000 spectators combined. The future look of the football court in Loznica

The players’ tunnel is accessed from the football club’s main facility, which also has all the accompanying features necessary for the complex to function properly.

The auxiliary facility is located between the main court and the auxiliary court, and can be accessed exclusively through the grass field.

Both ticket booths are located within the southern section of the area defined within the urban plan, more precisely, along the parking lot in Maksima Gorkog Street and the footpath which separates the sports complex from the park.

The kiosk will also be located in the southern part of the stadium, along Maksima Gorkog Street.

In addition to the said facilities, the stadium will feature two football fields, the main one and the auxiliary one, as well as developed green areas. The complex will be fenced off.

Let us remind that, in addition to Loznica, new stadiums will be built in Vranje, leskovac, Kraljevo, Zajecar and Kragujevac as well.