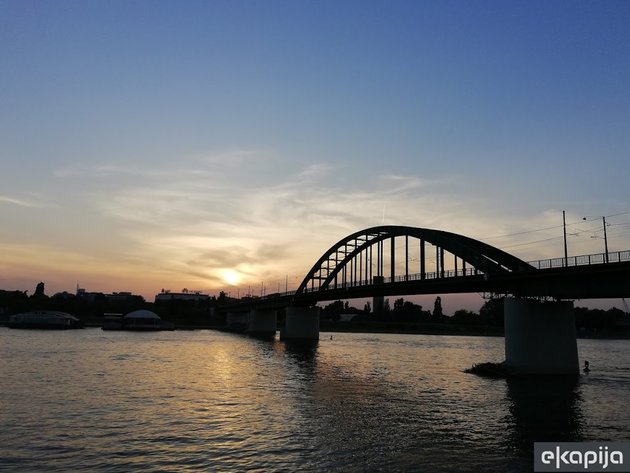 Old Bridge not to be moved (Photo: Katarina Stevanović)
All things considered, the Old Sava Bridge is not likely to be moved between the New Belgrade blocks and Ada Ciganlija, but a whole new pedestrian and cycling bridge over the Sava could be raised in this location.

At a session of the City Assembly of Belgrade, the members of the city parliament will discuss the preparation of a detailed regulation plan for the construction of a pedestrian and cycling lane between New Belgrade and Cukarica. The draft document does not mention the possibility of moving the current Old Sava Bridge, an option that has been announced for a long time now.

– There's an option of moving the Old Sava bridge to the Usce park and for certain illegal structures which are currently located there to be moved under the bridge itself. Unofficially, eight outlets should fit beneath it – the head urban planner of Belgrade, Marko Stojcic, told Blic only a week ago.

This became an option once it was realized that the total price of moving the bridge to New Belgrade and its turning into a pedestrian and cycling bridge would cost nearly as much as raising a new one and moving the old one to the Usce park.

The detailed regulation plan covers the area between Omladinskih Brigada Street (Block 70) and Ada Ciganlija, with a bridge on the Sava. Also, this traffic route will include the necessary ramps for descending towards the New Belgrade blocks and connecting the cycling and pedestrian lanes on the New Belgrade side along the wharf and with the existing traffic routes in Ada Ciganlija.

Still, no matter how attractive it looks on paper, the project is not likely to be realized in the upcoming years. As the draft document says, the deadline for the preparation of the detailed regulation plan is 18 months.
Tags:
Marko Stojčić
Old Sava Bridge
tram bridge
Ušće park
moving of Old Sava Bridge
cultural facility
project survey
bridge as sculpture
footbridge
construction of a new bridge
Share: