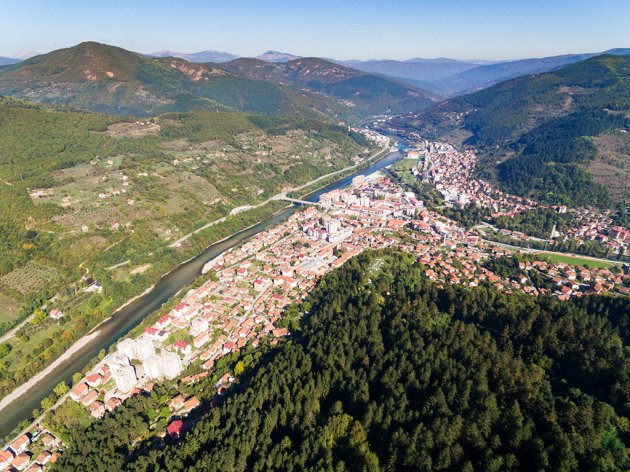 Foca (Photo: novak.elcic/shutterstock.com )
The minister of industry, energy and mining of Republika Srpska, Petar Djokic, visited the Buk Bijela location on the Drina in the municipality of Foca, where a hydro power plant is to be raised, together with representatives of the Aviation Industry Corporation of China (AVIC) this Thursday.

After a meeting with the representatives of the Chinese company and the head of the municipality of Foca, Radisav Masic, Djokic told the press that the selection of a partner for the construction of the HPP Buk Bijela was yet to follow and that AVIC had shown a great interest in taking part in the project.

– It is of great importance to us that such a large company, which has 500,000 employees, has shown an interest in being a partner to Republika Srpska. There are other interested companies as well, we'll see who ends up in the final round and who makes the best bid – Djokic said.

He reminded that the concept of the construction of hydro power plants Buk Bijela, Foca and Paunci in the Upper Drina system had been changed with the inclusion of Serbia, with which Republika Srpska would build these capital facilities.

He noted that the Buk Bijela was prepared to a large extent.

– The basic infrastructure is prepared, the access roads are there, as are accommodation facilities, water supply, power, and a high-voltage network is located near the facilities, capable of taking the energy which will be produced there – Djokic said.

He said that the company was also interested in building three small HPPs on the Bistrica and one on the Janjina, which would have installed power of 45 MW altogether and would be built by Elektroprivreda Srpske.
Tags:
Aviation Industry Corporation of China
AVIC
HPP Buk Bijela
construction of HPP Buk Bijela
Upper Drina system
HPP Paunci
HPP Foča
Petar Đokić
Share:

Only logged-in users can comment.
Latest
Most read
Digital Marketing Gets New Tool – Local Platform for Business Analysis of Data from Social Networks and E-commerce Platforms to Arrive 14.08.2020.
Aeroflot Cancels All Flights to Tivat in 2020 13.08.2020.
This is What Banjaluka Congress-Concert Hall will Look Like – Preliminary Design Selected 14.08.2020.
Srbija Voz to Get New Information System for Company Resource Management and Modernize Sales Network 14.08.2020.
Construction Activities in Location of Fire-Destroyed Belgrade Depot to Start in September – Residential and Office Facilities Planned 28.04.2020.
Al Dahra to Invest EUR 173 Million in Most Modern Agricultural Complex in This Part of Europe – By the End of 2022, Palilula to Feature Animal Feed Factory, Silos, Biogas Power Plants, New Irrigation Systems... 09.08.2020.
Aeroflot Cancels All Flights to Tivat in 2020 13.08.2020.
Take a Ride Down Great Backa Canal on Little Boat Tatjana 12.08.2020.
Weather
Weather forecast