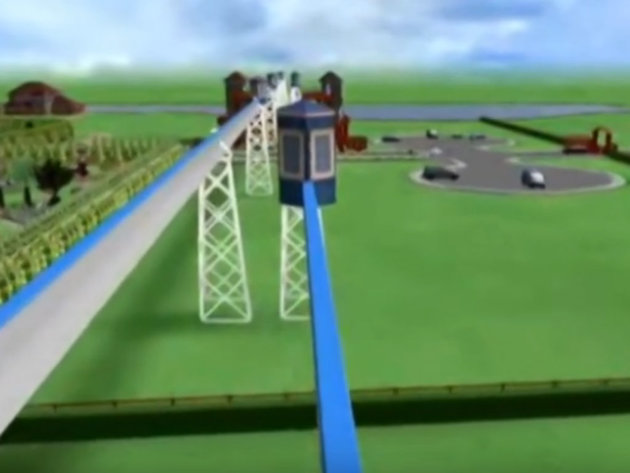 (Photo: YouTube/screenshot)
After the 17 columns that were raised up to Ribnica, the column number 27 was raised on the route between the Ribnica Lake and the Tornik peak, on Thursday, July 10.

– Concrete works should be completed around July 20, after which the raising of the columns is to start. In line with the weather conditions and the time needed for the concrete to solidify, the columns will be finished about a month after the concrete works are done. The works on the substation are to start. The ground next to the Ribnica Lake is being prepared and this will be a truly wonderful place, where the visitors will be able to take a break while riding the gondola and view Zlatibor from an aerial viewpoint. We have prepared a 3D video which shows a ride above Zlatibor, which looks truly realistic with 3D glasses – explains Bojana Bozanic, the director of the PE Gold Gondola Zlatibor.

The company is satisfied with the pace of the works and hopes that the weather conditions will be favorable and that the works will go on at the set pace.

– I've mentioned the company Jedinstvo, and there are also Amiga, Hidromontaza, Elkoms, which operate as a consortium, and we are very satisfied with them so far. The work schedule has been fully honored and I hope that the gondola will become operational by the end of the year – Bozanic emphasizes.

Let us remind that the length of the gondola, which should be the longest gondola in the world, will be 9 kilometers. The 36 columns will be supporting 55 cabins with a load bearing capacity of 800 kilograms. The cabins will also provide room for cyclists, snowboarders and skiers to carry their equipment. According to Bozanic, the introduction of some other features in the cabins is also being considered.
Companies:
Gold gondola Zlatibor Čajetina
Elkoms d.o.o. Beograd
Hidromontaža d.o.o. Beograd
Amiga d.o.o. Kraljevo
MPP Jedinstvo Sevojno a.d. Sevojno
Tags:
Bojana Božanić
Zlatibor gondola
construction of Zlatibor gondola
gondola on Zlatibor
ski center Tornik
Share: