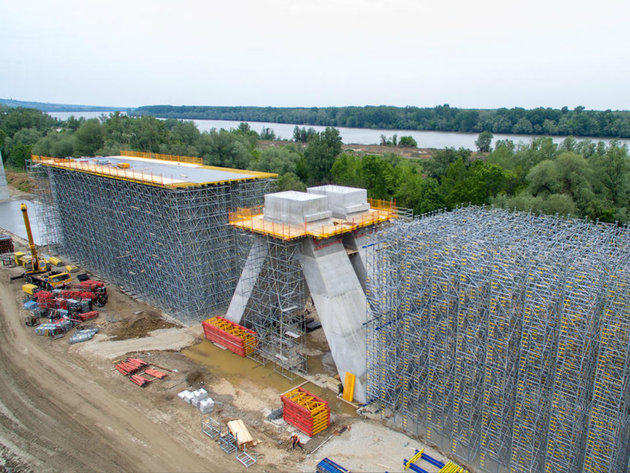 Stara Pazova-Novi Sad section (Photo: APV)
The construction of the high-speed railway between Belgrade and Budapest is the biggest infrastructural project in this part of Europe, said Serbian Minister of Construction, Transport and Infrastructure Zorana Mihajlovic. She announced that a trilateral ministerial meeting between Serbia, China and Hungary would be held on Friday, July 5, in Belgrade, where the main topic would be the realization of this important project.

She also told RTS that it was the most financially demanding project, considering that the value of the Serbian section is close to USD 2 billion, whereas the total value is USD 4 billion.

– On the Serbian side, everything is going as planned. Two sections are being built, from Belgrade to Stara Pazova and from Stara Pazova to Novi Sad. The construction of the third section, Novi Sad-Subotica, starts next year. Tomorrow, we will discuss including another two states, North Macedonia and Greece, in this project, which is part of the global initiative “Belt and Road” – she stated.

The deputy prime minister added that Serbia had shown that it was able to comply with the agreed work schedule, especially when it comes railway traffic, and that 700 km of railways would have been reconstructed before the end of 2019. She also said that she expected North Macedonia and Greece to show interest, despite the internal problems they're experiencing.

– Serbia is politically and financially stable and has the biggest inflow of foreign investments. It is in our interest to include North Macedonia and Greece in this project, as it's not enough to just have a high-speed railway from Belgrade to Budapest. Instead, we should connect the entire corridor – she said.
Companies:
Ministarstvo građevinarstva, saobraćaja i infrastrukture Republike Srbije
Tags:
Ministry of Construction Transport and Infrastructure
Zorana Mihajlovic
Belgrade Budapest high speed railway
Belgrade Stara Pazova section
Stara Pazova Novi Sad section
Novi Sad Subotica section
Belt and Road initiative
construction of Belgrade Budapest high speed railway
Share: