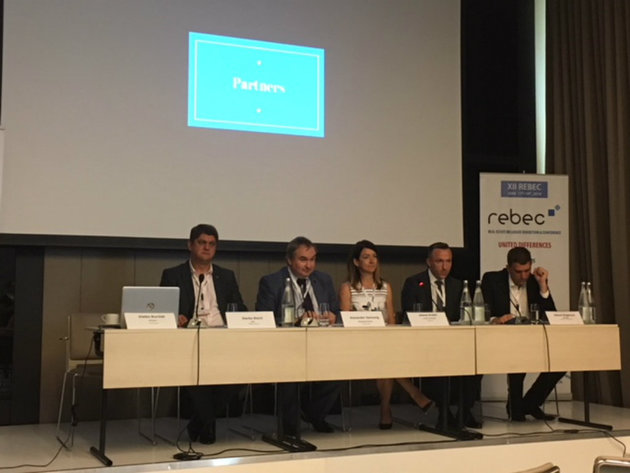 Participants in the panel at REBEC 2019 conference
The Dutch company CTP Invest has been present in the Serbian market for around 20 months. In that time, the company has started or already built facilities on over 150,000 m2. Around EUR 150 million was invested in these projects, which is a great success in a relatively short period of time, and as Vlatko Djuricek, the director of CTP for Serbia, told eKapija, this is just the beginning.

– We have long-term plans in Serbia, as shown by our investments and our work on the construction of facilities, which take up over 150,000 m2. Last year, we bought the building of the company Phoenix Pharm. This is a 10,227-m2 building with 3.5 hectares of land, with the possibility of expansion to 5,500 m2. This facility is part of the “Belgrade West” park, which is a separate entity and which has been completed. We are slowly finishing the second part of the “Belgrade West” project. This is a facility of 14,100 m2, which is in the final stage of construction. All works will be completed by the end of June, and the facility will be handed over to the client on July 30 – says Djuricek, who took part in the panel titled “Development of Industry and Logistics” within this year’s REBEC 2019 conference.

As he pointed out, another important project for CTP Invest is the construction of an industrial park in Kragujevac.

– We started the construction of CTPark Kragujevac two months ago. It will have around 25,000 m2 and this is a production facility which will be used by one of our clients. The opening ceremony is planned for November 1, 2019 – Djuricek points out.

As eKapija has written before, CTP Invest also plans to build an industrial park in Novi Sad. As Djuricek says, the realization of this project will start soon.

– The facility in Novi Sad is in the final phase before the beginning of the construction. We expect to start building in the next month to a month and a half, and the aim is to open the entire facility of 24,350 m2 in the first quarter of 2020. We already have a client for CTPark Novi Sad as well. The negotiations are in the final phase and I can disclose that this is also about production activities – eKapija’s interviewee says.

The next project of the Dutch company is also located in Belgrade, namely, the “Belgrade North” project in Novi Banovci.

– This project is still in the development phase. We have received preliminary approvals for this facility of around 75,000 m2, and we expect to get a building permit in the next few days as well. This is a three-facility complex, and, after obtaining the permit, we will start building the first facility, of 28,500 m2, in coordination with the client. We hope that this will happen in the next two to three months – Djuricek says.

Nearly all the facilities of CTP Invest already have renters or are in the final stages of negotiations. Still, as our interviewee says, there’s always room for further investments.

– We are open to cooperating with small and large local companies and with foreign partners. As I’ve already said, our company has long-term plans in Serbia and we are interested in further investments. If a client contacts us and all facilities have already been leased, CTP Invest will make a new one, in line with renters’ demands and needs – Djuricek says for eKapija.