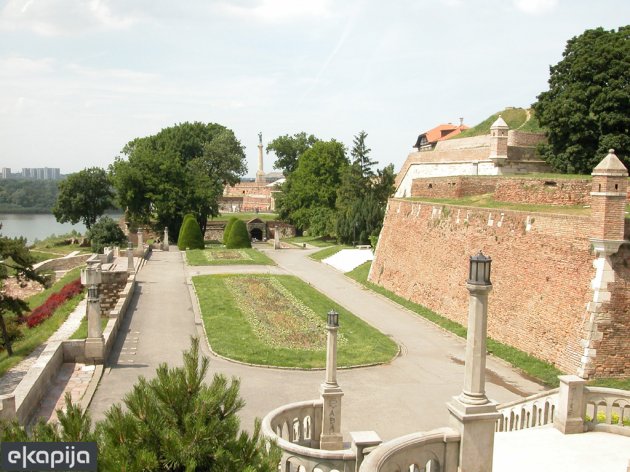 The Grand Staircase before the reconstruction (Photo: Suzana Obradović)
The reconstruction of the Great Staircase at the Belgrade Fortress is close to completion, and, according to experts, it will resemble the original one from the late 1920s.

The appearance of this part of Kalemegdan in March, when the works began, shocked many passers-by, citizens of Belgrade, visitors and tourists. The Great Staircase appeared demolished at the time. The authorities, however, claimed that everything was under control and promised that everything would be brought back to how it was originally.

The finishing works are in progress and the early-July deadline is likely to be met. As said, instead of the previously used Brac marble, the reconstructed staircase features marble from Danilovgrad, Montenegro. The small broken columns have also been replaced, and square planters, featured in the original staircase, but forgotten in the reconstruction of 1989, have also been installed.

This architectural masterpiece, one of the symbols of the Belgrade Fortress, was made in 1928 under the plan of Aleksandar Krstic, the head of the Park Department, and is the main connection of the Sava promenade with the upper fortress. This part of the fortress was rebuilt during the thorough reconstruction project at Kalemegdan after the First World War. Kalemegdan, especially its decorative staircases, was damaged during the bombing of 1941. It is assumed that the Great Staircase was reconstructed during the war, but in a very simplified form compared to the original one.

The reconstruction of the Great Staircase is only a part of the works carried out at the Belgrade Fortress in the past years. In addition to reconstructed locations, the projects at Kalemegdan also include the construction of a footbridge to Beton Hala, and a gondola system is planned as well.