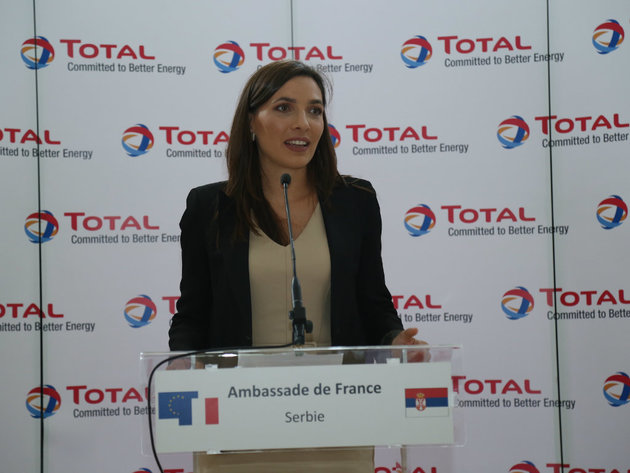 Priscilla Dubocage
The new CEO of Total for Serbia, Slovenia and Croatia, Priscilla Dubocage, announced further investments in the Balkans market, along with the continuation of the company’s intensive engagement when it comes to corporate responsibility projects, at an event held on June 6 at the French Embassy, in the presence of the French Ambassador to Serbia, Frederic Mondoloni.

Priscilla Dubocage succeeds Almila Acan Kahvecioglu, who was been appointed to the second position within Total Group. As announced, Dubocage will officially assume the duty of CEO on July 1, 2019.

– I am proud that I have the opportunity to continue developing the plans initiated by my predecessor, Almila Acan Kahvecioglu, and announce even more investments when it comes to securing a high-quality, original product, while at the same time focusing on corporate responsibility projects to the end of strengthening the said relations and maintaining the strong position of Total in the region – Dubocage stated.

Kahvecioglu thanked her colleagues at Total HUB Balkans for their hard work in the past 5 years. She emphasized for our portal that, in 2018, the total income of Total HUB Balkans amounted to USD 27 million and that they implemented several projects which enabled Total to strengthen its position in the Balkans region.

– In addition to those which were focused on our close partners and clients, such as Rubio caravan, meant for professional drivers, during which we visited Serbia, Croatia, Slovenia and Bosnia and Herzegovina with our specialized Rubio truck, and our growing Total Quartz car service network in the entire region, we also invested in corporate responsibility projects such as “On the road to child safety in traffic”. The importance of the said project has been recognized globally by Total through the first place at the internal contest for Innovations in Europe, as well as by the French-Serbian Chamber of Commerce, which gave it the Grand Prix 2018 award – Kahvecioglu told eKapija.

At the conference, Pierre Duhot, the vice president of Total for Southeast Europe, emphasized the total income of Total Group in 2018 of USD 50 million when it comes to the Balkans region, where Serbia contributed USD 13 million, Croatia USD 6 million and Slovenia USD 28 million.