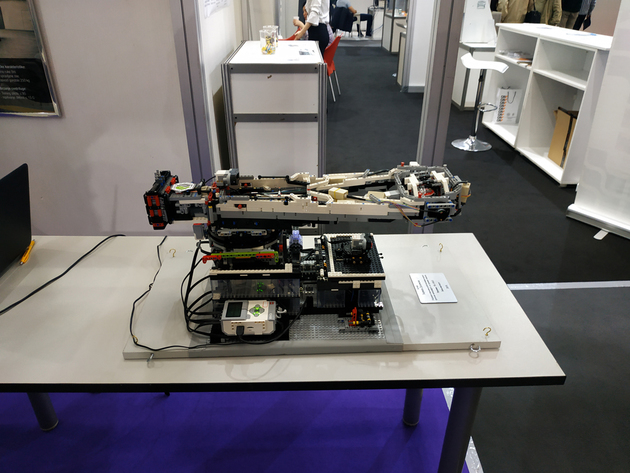 (Photo: eKapija)
A simplified robotized triple-axis centrifuge model for pilot training, made from LEGO elements, attracted a lot of attention from the visitors at the Fair of Technics.

The model is a part of the project of the Ministry of Education, Science and Technological Development: “Development of device for pilot training and dynamic flight simulation of modern jet fighters, namely, a 3-axis centrifuge and 4-axis device for spatial disorientation of pilots”, meant for future pilots, but also engineers who are interested in devices of this kind.

This model is useful both to future pilots and to engineers, as it allows them to experience what awaits them when they're making or using an actual device, but also for educating younger population about robotics, Dodevska says.

– The centrifuge for pilot training can be produced based on the project documentation prepared at the Lola Institute within the TR 35023 project. The scaled-down centrifuge model is made so as to be very similar to the projected centrifuge at an approximate ratio of 1:20, so the model has a presentational, developmental and educational role.

According to her, the showcased model is made of LEGO elements and features a range of sensors, engines and other electronic equipment making up the hardware component of the device, whereas the software component consists of a set of advanced program units created in the LEGO® MINDSTORMS® Education EV3 environment.

– The cabin currently features a multisensor which allows us to measure the number of rotations, the angular velocity and acceleration along all three axes. The lower part of the cabin is replaceable, so we can easily set up another sensor and conduct various experiments depending on the data we need. The data we get are put into the EV3 intelligent cube and are later transferred to a computer, where they can be further processed. This device is tested for around 182 revolutions per minute, which generates gravity over 17 times stronger that the Earth's in the cabin.

In addition to the hardware and the software, an important component of the concept of a simplified robotized model is the use of innovative technologies which require a concrete physical model.

To clarify, an augmented reality phone app has been developed, which displays various virtual objects in a physical environment, providing the user with additional information about the device. As Dodevska emphasizes, the plan is to further develop the app within the Vuforia® Studio™ of the company PTC, whose local distributor is CPS-CAD Professional Systems from Belgrade, and which provides the Institute with the said software.

This is a unique model, and, according to Dodevska, there was no manual based on which it could be built.

– The model is built from several LEGO sets, a large number of additional LEGO elements and additional parts, such as sliding rings, which facilitate the transfer of electricity and data between the static and the rotating parts of the centrifuge and prevent the cables from getting entangled during the rotation – she explains.

The model was also presented at the IcETRAN 2019 international conference, which was held from June 3 through 6 at Srebrno Jezero. As for the upcoming plans, Dodevska says that she is currently working on forming an education program within the Center for Robotics.