(Photo: Đorđe Bajilo)
Podgorica has a new facility within the Sports Center Moraca, which is expected to become a symbol of this city – Bemax Arena. The existing complex opened in 1980. It was built under a project by academy member Djordje Zlokovic, and the reconstruction is the work of architect Djordje Bajilo from the Novi Sad-based company DBA, which prepared full technical documentation together with its Montenegrin branch DBA Montenegro.

– The facility has the capacity of 2,400 fixed seats and around 200 spaces on the telescopic stands, which are located beneath the main stands and which are used per need. The seats are the work of the Spanish giant DaPlast. The facility has several dressing rooms in line with all the necessary standards, and the special feature is that this is probably the only facility of its kind to have a VIP dressing room, meant for concerts and similar events – Bajilo explained for eKapija.

He added that all dressing rooms featured screens, allowing the users to follow what's going on in the hall itself in real time. The facility is covered by a modern system of central video surveillance and face-recognition system, an important security feature.

– In additional to the functional lighting for sports games, the exterior and the interior lighting in the facility also has a decorative function, helping the hall become a new symbol of Podgorica. The sports lighting was entrusted to Philips, whereas the sports floor was produced by the renowned company Connor. The scoreboards and video displays are made by the French Bodet, whereas the hoops are made by Spalding – Bajilo says. 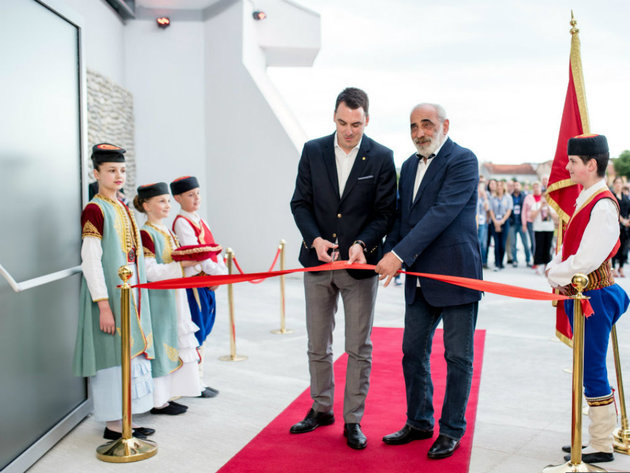 Podgorica Mayor Ivan Vukovic and KSCG President Veselin Barovic at the opening of Bemax Arena (Photo: Đorđe Bajilo)
The old sports center consisted of two complexes, a large and a small court. The former was used for court sports, whereas the latter featured a pool. There were also open courts, as well as Hotel Podgorica. Over time, important sports events came to be held exclusively at the large court, which was consequently modernized, extended and renovated.

– In time, the indoor pool was entirely ruined. It was out of its main function for more than 15 years, until late 2016, when, at the initiative of the then president of the Basketball Federation of Montenegro (KSCG), Milo Djukanovic, the first steps and activities were carried out toward the reconstruction of the facility and its turning into a sports hall, as the outdoor pool had been partially closed in the meantime and there was no longer need for this facility to be used that way – Djordje Bajilo says.

He emphasizes that the idea was to turn the facility into a modern sports court, meant for basketball primarily.

– The Podgorica-based company Bemax recognized its interest, social responsibility and sports mission through investments and engagement in the development of the facility which is now called Bemax Arena. The enormous resources of this company and the creative design vision of DBA have resulted in a facility which is surely one of the best and most modern sports halls in Europe and certainly in the region – Bajilo claims.

The facility will be primarily used by KSCG teams and several basketball clubs. The technical features of the facility make it suitable for all other court sports and mini-sports as well.

Bajilo highlights as a special advantage of Bemax Arena its drastically improved energy efficiency. It is reflected in increased performances of the thermal cover and the quality of the glass facade itself. The use of modern thermal equipment guarantees comfort.

– The acoustic features and the issue of interior sound comfort were analyzed and treated with special care, so here we will have 2,400 spectators making more noise rooting for their team than an audience of 5,000 could in some other facilities of the same purpose – Bajilo concludes.