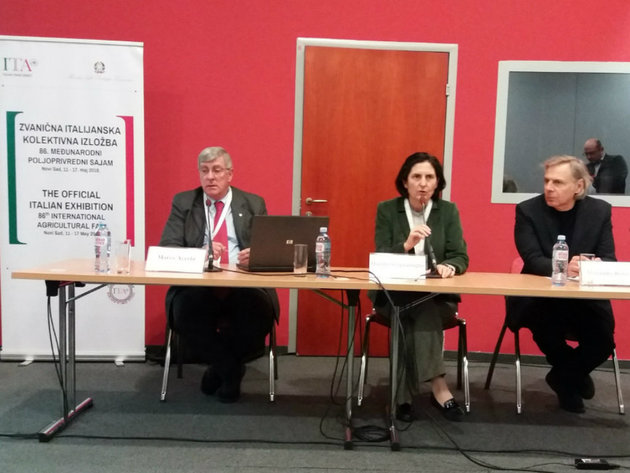 Marco Acerbi, Marina Scognamiglio and Girolamo Rossi (Photo: Jelena Gajinov)
At the collective fair organized by the Italian Trade Agency (ITA) at the International Agricultural Fair in Novi Sad, nearly 30 companies from Italy presented themselves. This was a record setting number when it comes to the participation of Italian representatives, and the interest of Serbian companies in events in Italy is no less strong.

That's why a presentation of Agrilevante was held in Novi Sad, where the Italian Agricultural Machinery Manufacturers Federation (FederUnacoma) presented the events EIMA in Bologna, Agrilevante in Bari, but also the Agromac fair, which this federation organizes in New Delhi with its partners in India.

As Marco Acerbi, the director of FederUnacoma, said for eKapija, despite a slight drop in the sales of Italian agricultural machines in Serbia lately, as a consequence of global economic trends, Serbia is a very interesting market for companies from Italy.

– It's enough to see the exhibitors at this fair. Each stand features at least two or three Italian suppliers, members of FederUnacoma. It is all tied very closely together, but there's certainly a lot of room for it to expand and develop further – Marco Acerbi says for our portal. 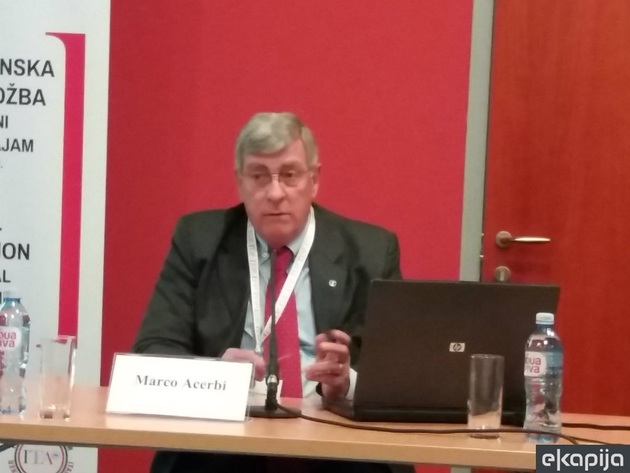 Marco Acerbi (Photo: Jelena Gajinov)
When it comes to the participation of Serbian companies in agricultural fairs in Italy, the director of FederUnacoma says that they are more than welcome.

– So far, there have not been exhibitors from Serbia at the Agrilevante fair in Bari, but, on the other hand, there are Serbian companies which exhibit at the EIMA fair in Bologna. We hope that this fair in Bari will also attract Serbian agriculturists, and the application procedure is very simple. There's an application form in English at www.agrilevante.com and everything is available and open, so there's no reason why Serbian companies shouldn't apply – Acerbi says.

As our interviewee says, he's also available to interested exhibitors.

– All agriculturists from Serbia can address me with any question regarding the fairs that FederUnacoma organizes in Italy. Really, our door is open to all companies from Serbia which are looking to present themselves at events in Italy – Marco Acerbi says.

When it comes to Serbian companies' attending fairs and events held in Italy, they can get great support from the ITA.

– The interest of Serbian producers in fairs in Italy is truly very big. Even if they don't take part in them as exhibitors, they certainly have an interest to at least visit these events, which is no surprise, considering that Italy is the leading producer of specialized agricultural machines in the world. For example, Agrilevante specializes in agricultural machines for the Mediterranean area, which this region belongs to. At these fairs, we can also see the latest technological achievements when it comes to agricultural mechanization, so agriculturists from Serbia certainly have a great interest in visiting these events. It is also important to emphasize that Italy is a friendly country and that it is not far away, so the reasons are plentiful – the director of the Belgrade office of the ITA, Marina Scognamiglio, says for eKapija. 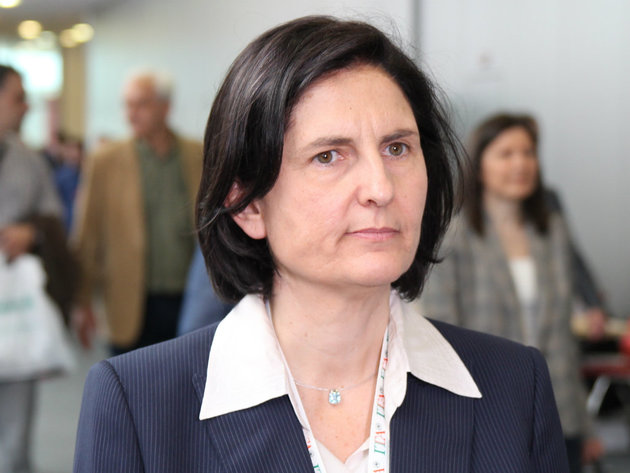 Marina Scognamiglio
As she says, the application procedure for fairs in Italy is more than simple.

– The organizers of these fairs first contact the ICE agency and announce their targets, that is, what their target groups are. In line with this, our team of analysts, who are specialized in certain areas, invite local companies which have an interest in taking part in these fairs. If a company has not been contacted and is interested in fair events in Italy, they should certainly call our office and apply. Based on the requests from Italian partners and the interest of local companies, our experts make a selection – Scognamiglio says.

According to her, the ITA always tries to rotate the companies selected for fairs in Italy, so that as many companies could present themselves to Italian agriculturists as possible.

During the presentation of the fairs organized by FederUnacoma, Marco Acerbi pointed out that the EIMA fair was organized every two years in Bologna. This fair celebrated its 40th anniversary in 2019, and it is the second biggest such event, both in the number of exhibitors and the number of visitors.

– The fair is held in Bologna, in a 450,000 m2 hall with 145,000 m2 of exhibition space. This fair puts a strong emphasis on B2B meetings. In addition to numerous visitors from Italy, the fair is visited each year by numerous foreign companies, looking to make agreements with exhibitors at these meetings. At the fair in Bologna, the visitors can see the latest machines and equipment for gardening, machines for biomass, but also irrigation equipment and systems – Acerbi pointed out.

The next EIMA fair will be held in November 2020 in Bologna, whereas Agrilevante will be held between October 10 and 13, 2019, in Bari.

– This fair is slightly smaller and has fewer exhibitors and less exhibition space, which certainly doesn't reduce the importance of this event. A special characteristic of this fair is that it is oriented toward the Mediterranean and products and machines characteristic of that area. The number of exhibitors at Agrilevante is growing year by year, and this year, an animal exhibit will be held for the first time, which will make the fair even more attractive – Acerbi said.

He also presented Agromac, one of the largest fair events in India, which will be held between December 5 and 7, 2019, in New Delhi.

Acerbi also reminded that Italy had around 2,000 companies which produce agricultural machines. In addition to the big players in the international market, there are also numerous small and medium enterprises, which realize a considerable percentage of exports – around 80% and realize sales of around EUR 7.5 million. Between 60 and 65% of the tractors produced in Italy are exported to around 150 countries, making Italy the third country in the world in the sales realized.

– However, when it comes to the number and the variety of agricultural machines exported, Italy is the first in the world – Marco Acerbi pointed out.