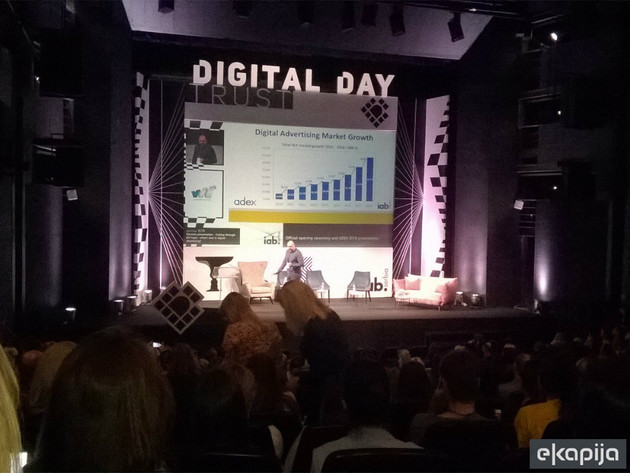 A total of EUR 36.8 million was invested in internet advertising in Serbia in 2018, which is 24.8% more than in 2017 and the biggest growth in Europe, it was said at the Digital Day 2019 conference. The ninth Digital Day, organized by IAB Serbia, was held under the slogan “How do you trust?”.

In 2018, internet advertising in Serbia accounted for around 20% of all advertising, a considerable progress, but still lower than in other markets, where the percentage can reach 50%.

Daniel Knapp, the Chief Economist at IAB Europe, talked at the conference about the future of online marketing and emphasized that it was noticeable that social networks are adapting to advertisers and users.

Knapp is an advertising and media analyst with 15 years of international experience. He has been in leading positions which entailed market analysis, strategic consulting, product and service transformation, as well as business intelligence and software-as-a-service.

– People worry that computers will get too smart and take over the world, but the real problem is that they're too stupid and they've already taken over the world – Knapp cited Pedro Domingos.

Digital Day 2019 was held on May 16-17 at the Yugoslav Drama Theater in Belgrade.

IAB MIXX Awards are traditionally given out at the conference to the most successful local companies in digital marketing.