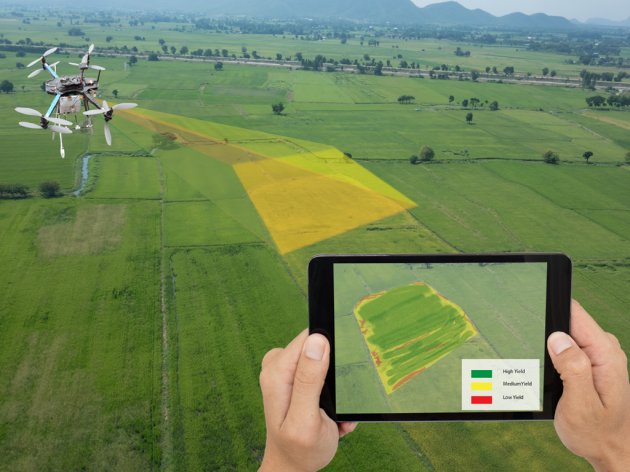 Illustration (Photo: Beros919/shutterstock.com )
The knowledge of agronomy, meteorology and machine learning has enabled the BioSense team of experts to win third prize at the prestigious Crop Challenge contest for the implementation of artificial intelligence in agriculture.

They used the parameters they knew had an impact on the yield – the number of consecutive tropical days in July, the number of days without precipitation, the total amount of precipitation in various phases of the development of maize and others. They then linked these parameters with the yield, thanks to machine learning, and easily detected the hybrids resistant to drought and high temperatures.

When asked how these algorithms work, one of the awarded researchers, Oskar Marko, says for eKapija that they are very specific.

– They are based on numerous data and give great results, but the interdependence of parameters in such models is so complex that no one can explain exactly what is happening inside them. That’s why they’re also called “black boxes”. I would therefore say that we are at a historical turning point. It used to be that an internal combustion engine would be designed first, and then an automobile would be designed based on it. Now we have self-driving cars, but we still don’t know what happens inside the algorithm they use.

What farmers certainly want to know is which hybrids have been marked as the most drought-resistant, but they will probably be disappointed to learn that Syngenta has not yet made them commercially available. As out interviewee says, some of them might reach Serbian farmers thanks to BioSense’s solution and the solutions of their colleagues from other teams.

When it comes to the concrete application of AI algorithms, Oskar Marko says that Serbian farmers will feel the benefits once BioSense gets all the data.

– At this contest, we were provided with around half a million climate data and around 100,000 data on maize yields, the GPS location of the farms, soil analysis etc. At the moment, no one in Serbia has 100,000 data on the production of maize. It is time to start gathering data so that we would be able to put our algorithms to use in a few years. The farm management platform AgroSens, which is free to use for local farmers and can be found at www.agrosens.rs, will certainly help here.

According to him, the award has shown that BioSense is at the very top when it comes to combining scientific knowledge in IT and agriculture in the world. He believes that it has opened the door to cooperation with seed production companies, farmers and science institutes for them.

– Here, climate change is manifested through increasingly frequent extreme conditions, such as droughts, but also floods. This means that we must work to make the whole farming production more resilient against such unstable climate, and choosing the right varieties and hybrids is perhaps the most import step. We are very glad that we have had the opportunity to work on solving a very current problem in the local agriculture and we hope that we will be able to implement the solution on Serbian farms as well, in a few years, when we have gathered enough data – the researcher says.

When asked how the consequences of the drought can be reduced using AI, Marko answers that the key lies in risk dispersion. He adds that nobody knows what the weather will be like next year, but that we need to be prepared for any situation.

– This question is similar to investing in the stock market. You can put all your life savings in bitcoin and hope for the best. However, sometimes it’s better to invest smaller amounts in several places, so that, even if one of you investments falls through, you’re not left with nothing. It’s similar in agriculture. Some hybrids are drought-resistant, other aren’t, but have a high yield, some other are disease-resistant, but give low yields. The aim is to sow a little of each, so that, even if one underperforms, others can compensate for it, and AI provides the exact answer to the question of how much “a little” is.

Last season, the institute concentrated on crop production in northern Vojvodina and the technologies used in this kind of production, primarily satellites, but also drones, variable dispensers and soil-sampling probes. This year, the Digital Farm is moving to Sumadija, where fruit growing will be in focus.

– Fruit growing entails whole new challenges. This year, we will try to present sensors, LORA networks and the Internet of Things to farmers, which can help them make optimal decisions, thereby increasing yields and reducing production risks – Oskar Marko says.