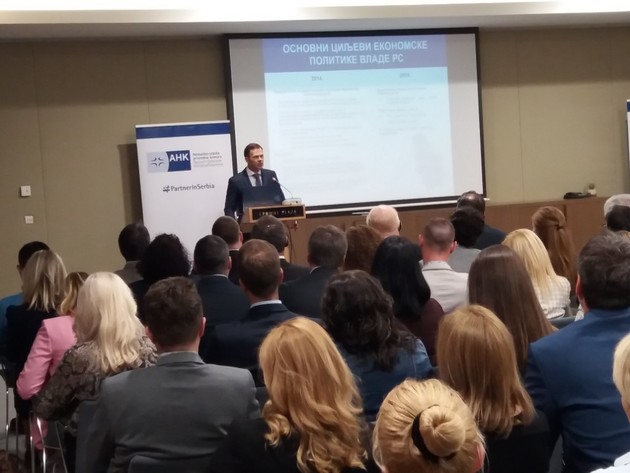 Sinisa Mali addressing members of AHK Serbia
Germany is one of the most important foreign trade partners of Serbia, Finance Minister Sinisa Mali said at a gathering organized by the German-Serbian Chamber of Commerce (AHK Serbia).

As he said, there are potentials for further cooperation. He reminded that around 1,000 German companies employed nearly 60,000 workers in Serbia.

– You might also include Volkswagen on the list of your members – Mali told the members of AHK Serbia.

He presented the budget of Serbia to the members of AHK Serbia and talked about fiscal consolidation and stabilization, but also about the modernization of the Tax Administration.

Sinisa Mali reminded that Serbia’s GDP had been growing since 2015.

– Despite the difficult measures of fiscal consolidation, the unemployment rate has been more than halved, and the government debt, which used to be 78% of the GDP, is now 50.1%.

According to him, the capital budget of Serbia is 30% higher compared to 2018.

As he said, the exports and the export-import ratio are growing, as are direct foreign investments.

Talking about the cooperation with other partners, the minister said that Serbia would most probably sign a loan agreement worth nearly a billion dollars for the modernization of railways on April 25. As he pointed out, the agreement will be signed between the presidents of the two countries, and the money will be used for the reconstruction of the Novi Sad-Subotica section.

Mali also noted that the reform of the tax administration was very important for business people and pointed out that the process was in progress at the moment and that the full reorganization would be completed before the end of June.

– The number of 79 organizational units we have now will be reduced to 37. They will be equipped with an adequate number of people in order to make them even more efficient – Mali said.

By the end of the year, Serbia will also have adopted a fiscalization program, have new fiscal cash registered or changed new ones, which will feature an online connection with the Tax Administration, which will be getting all the necessary information that way.

Mali announced that the problem of VAT recovery, one of the biggest demands made by business people in Serbia, would be solved as well.

– In cooperation with IMF experts, we are working on fully reforming the collection and recovery of the VAT. We hope to establish a system that would automate the process by the end of the next year, enabling the state to return the VAT to business people as efficiently as possible – he said.